This guide applies to just the Iris PCB for Kailh Low-Profile switches, where the order of the build steps are slightly different. If you're looking for the guide to the normal PCB, see Iris Build Guide

Note that some pictures from the normal Iris PCB have been used here, main thing to ignore from those pictures is the diode orientation.

Here's a summary of the build steps: 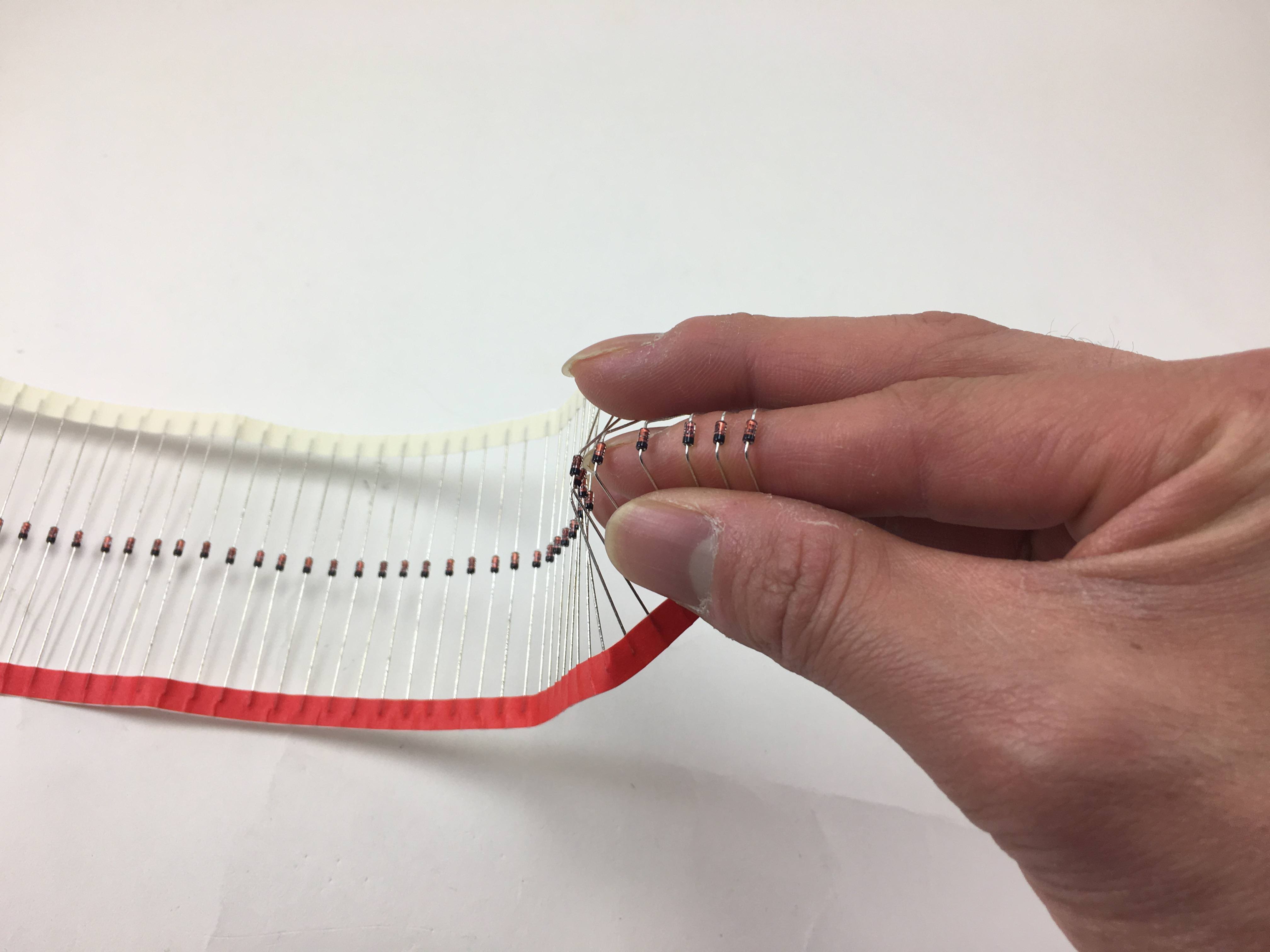 Bending the diodes. Here, I'm just bending it around my finger 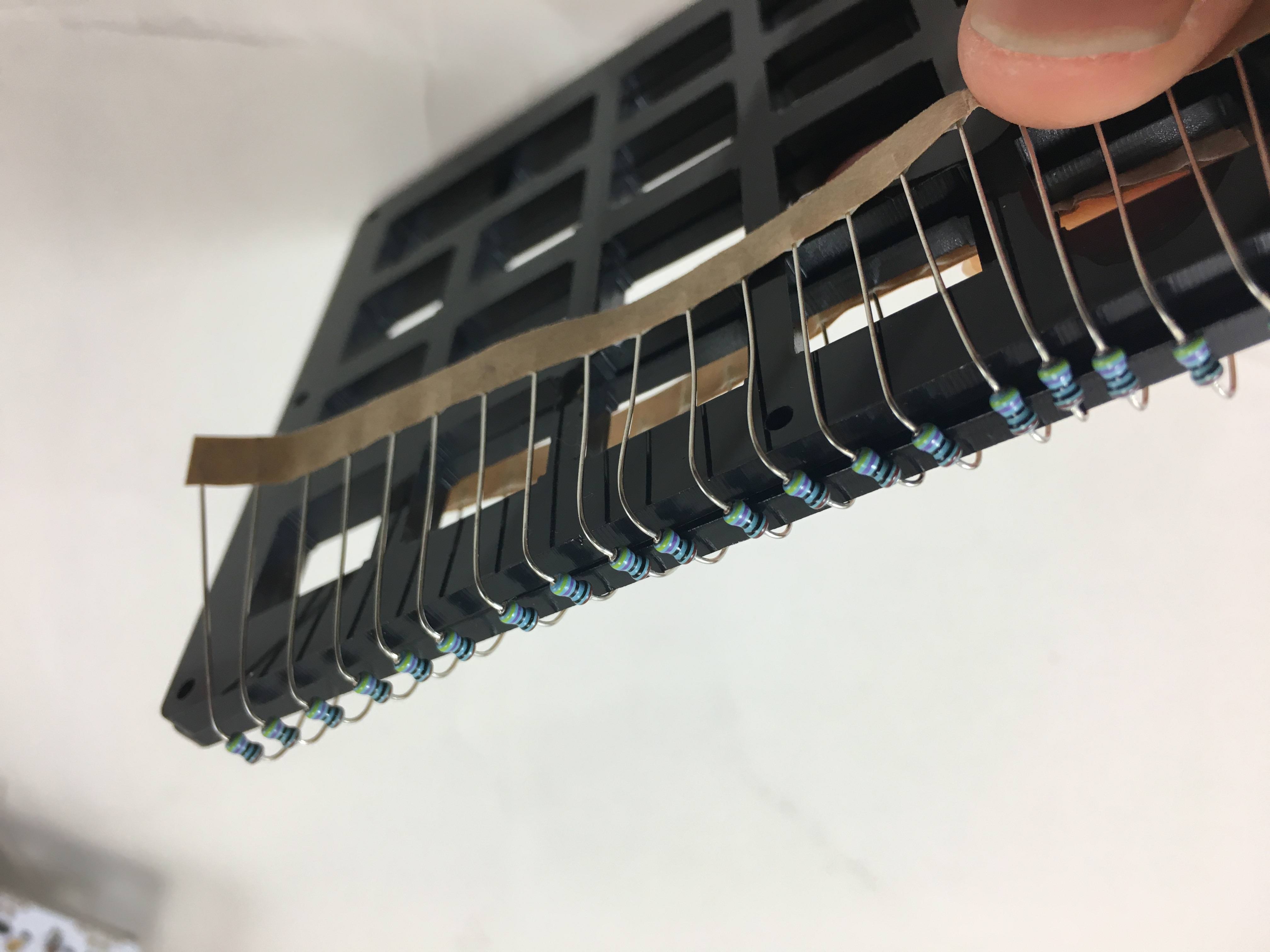 Another way to do it, resistors shown here 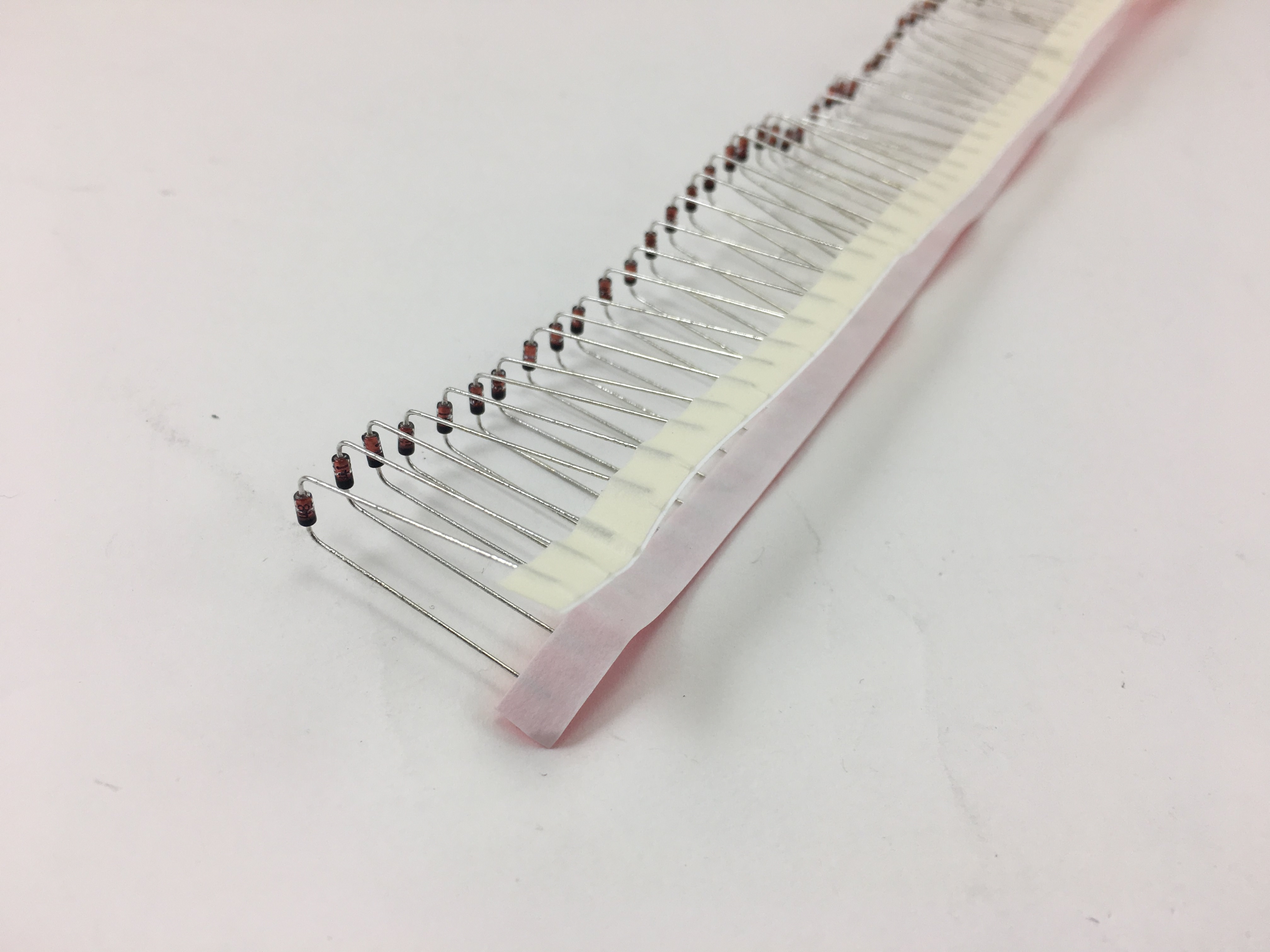 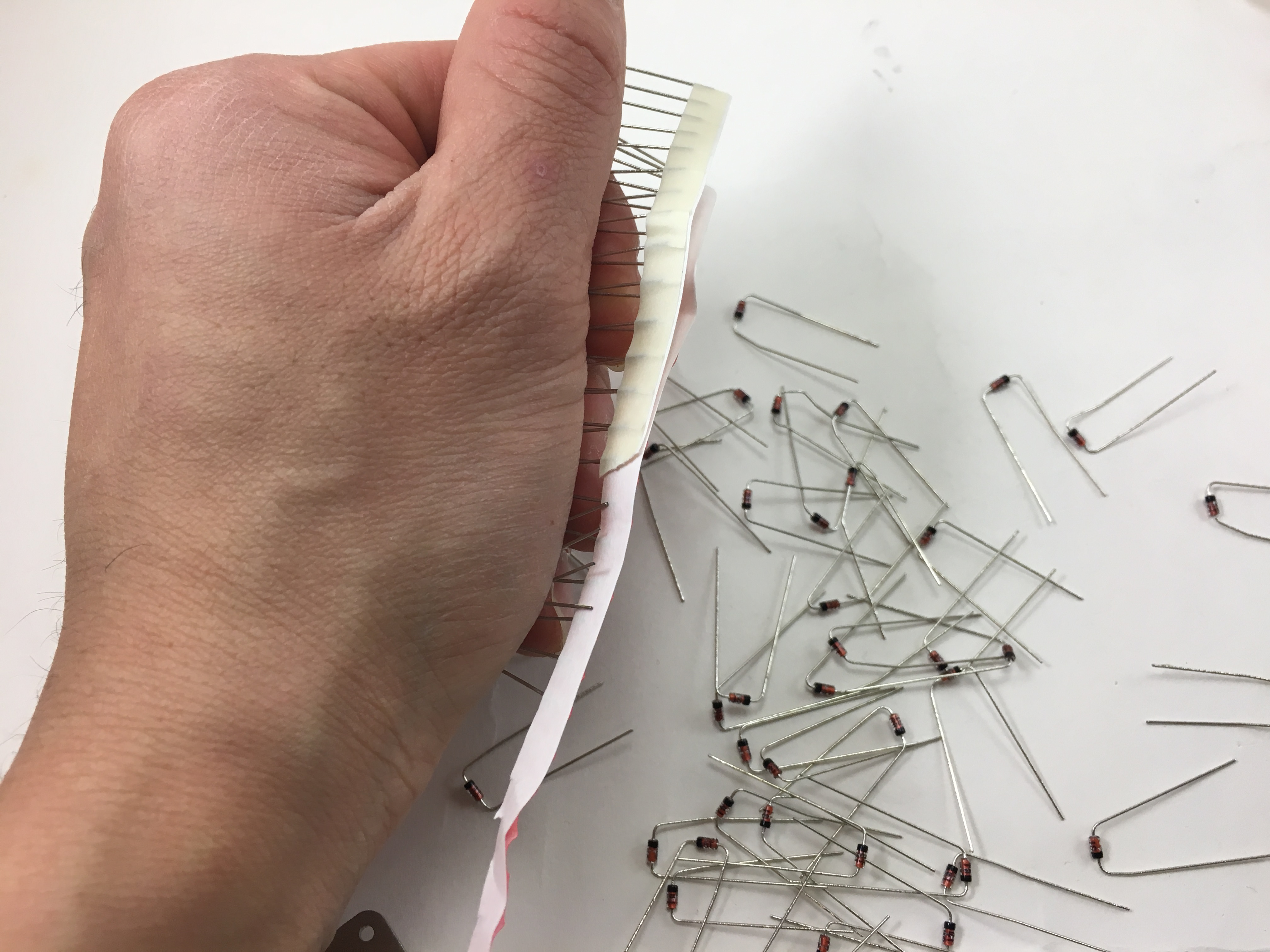 Ripping off the paper holding all the resistors together. Grip the diodes tightly so they don't bend as you're ripping the paper off. 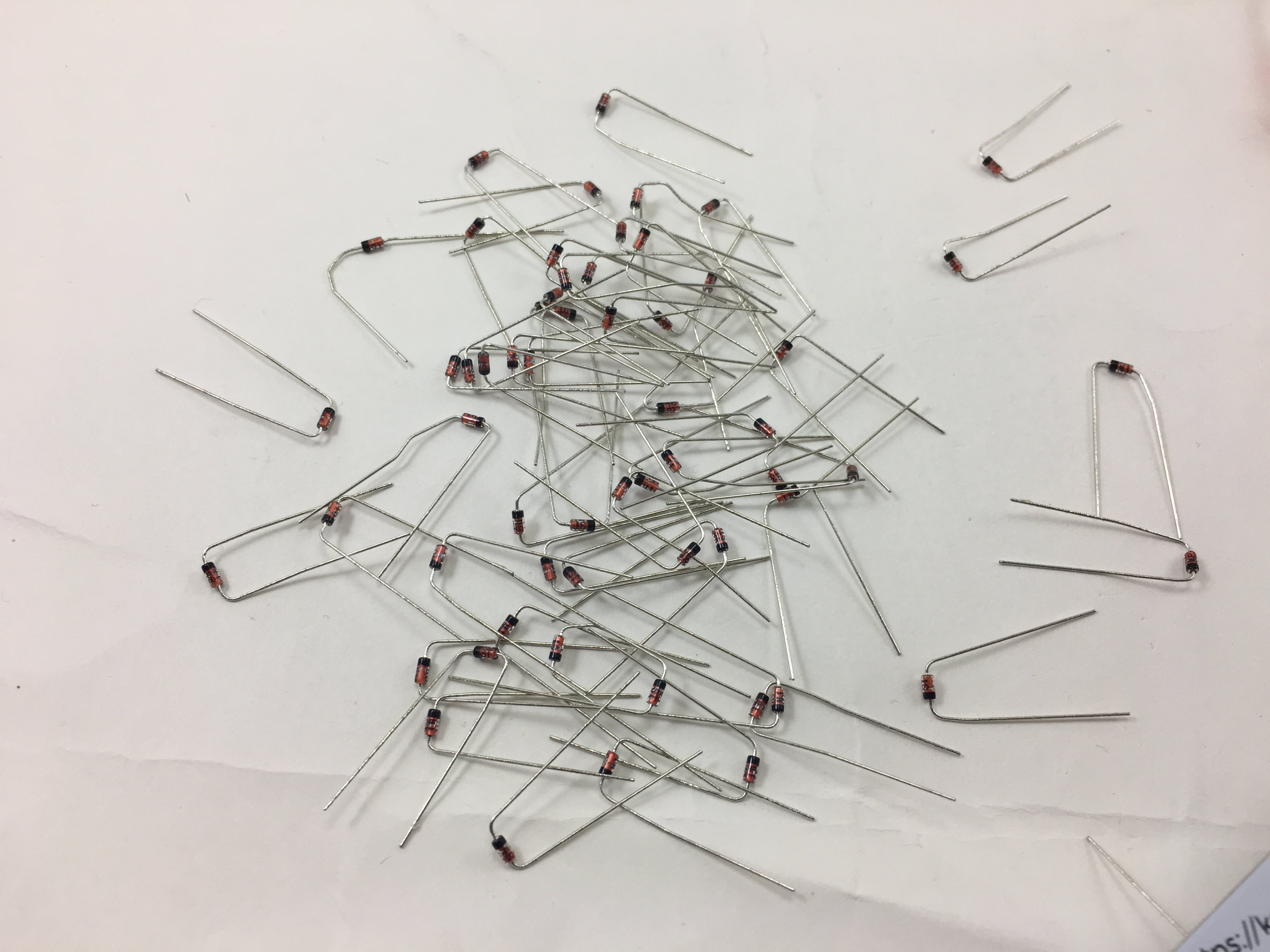 All separated from the paper

The diodes, resistors, MOSFETs, push buttons, TRRS jacks, and Pro Micro header pins can be soldered in any order. 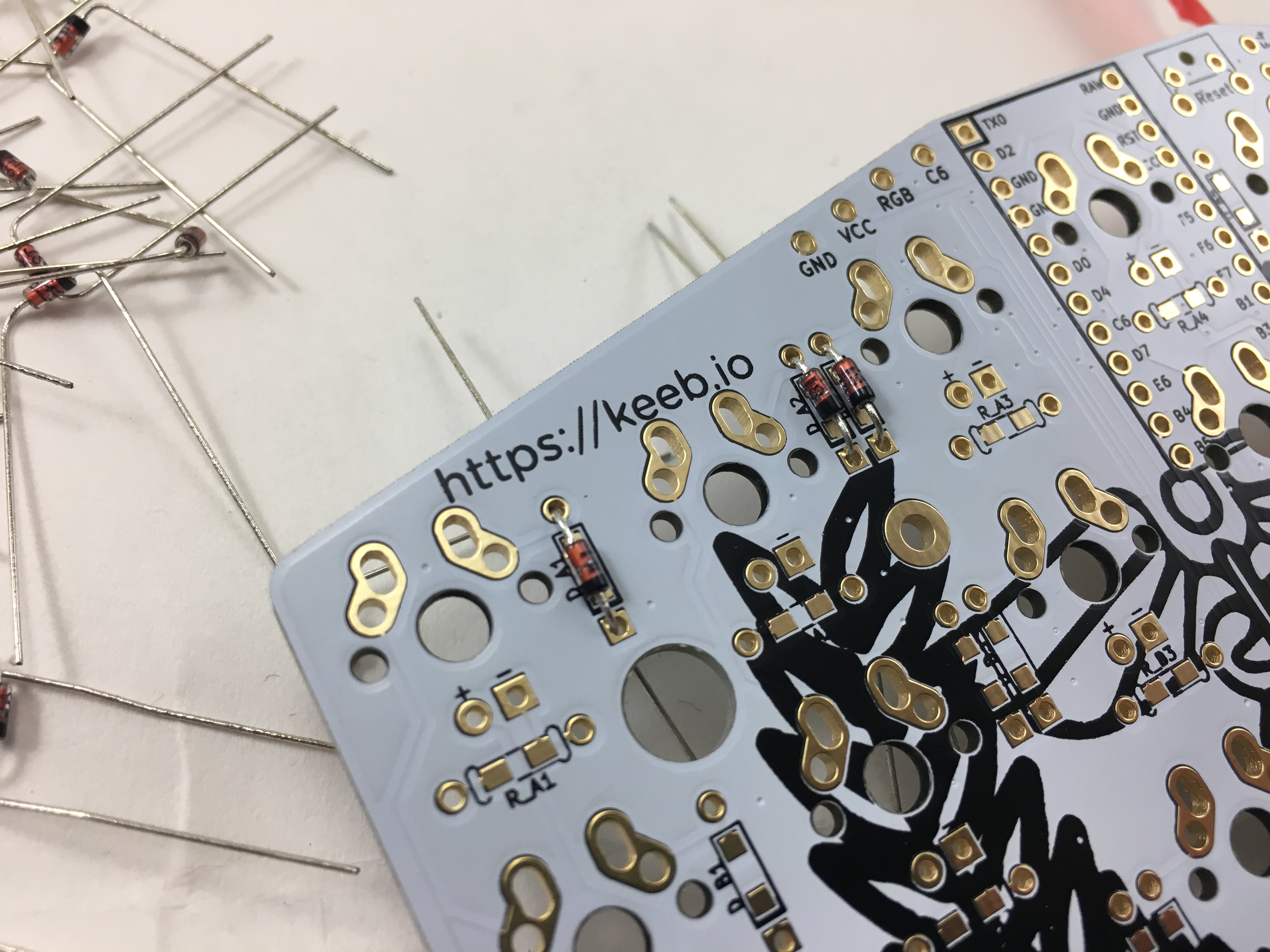 Some people stick the diodes on the top side of the PCB, which is not recommended, because you can't replace them once everything is assembled using that method.

Bend the legs out to hold the diodes in place for when you solder them in: 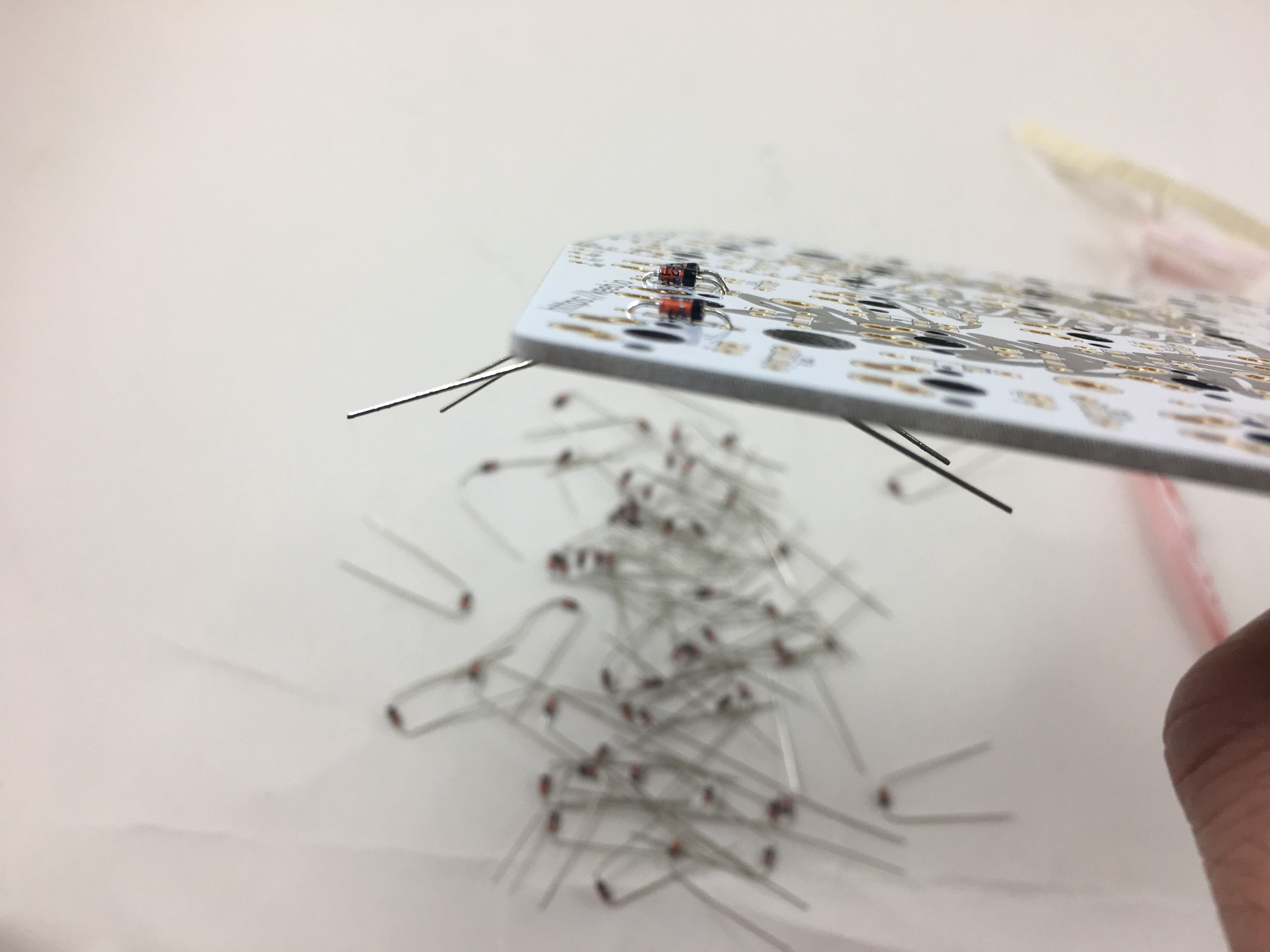 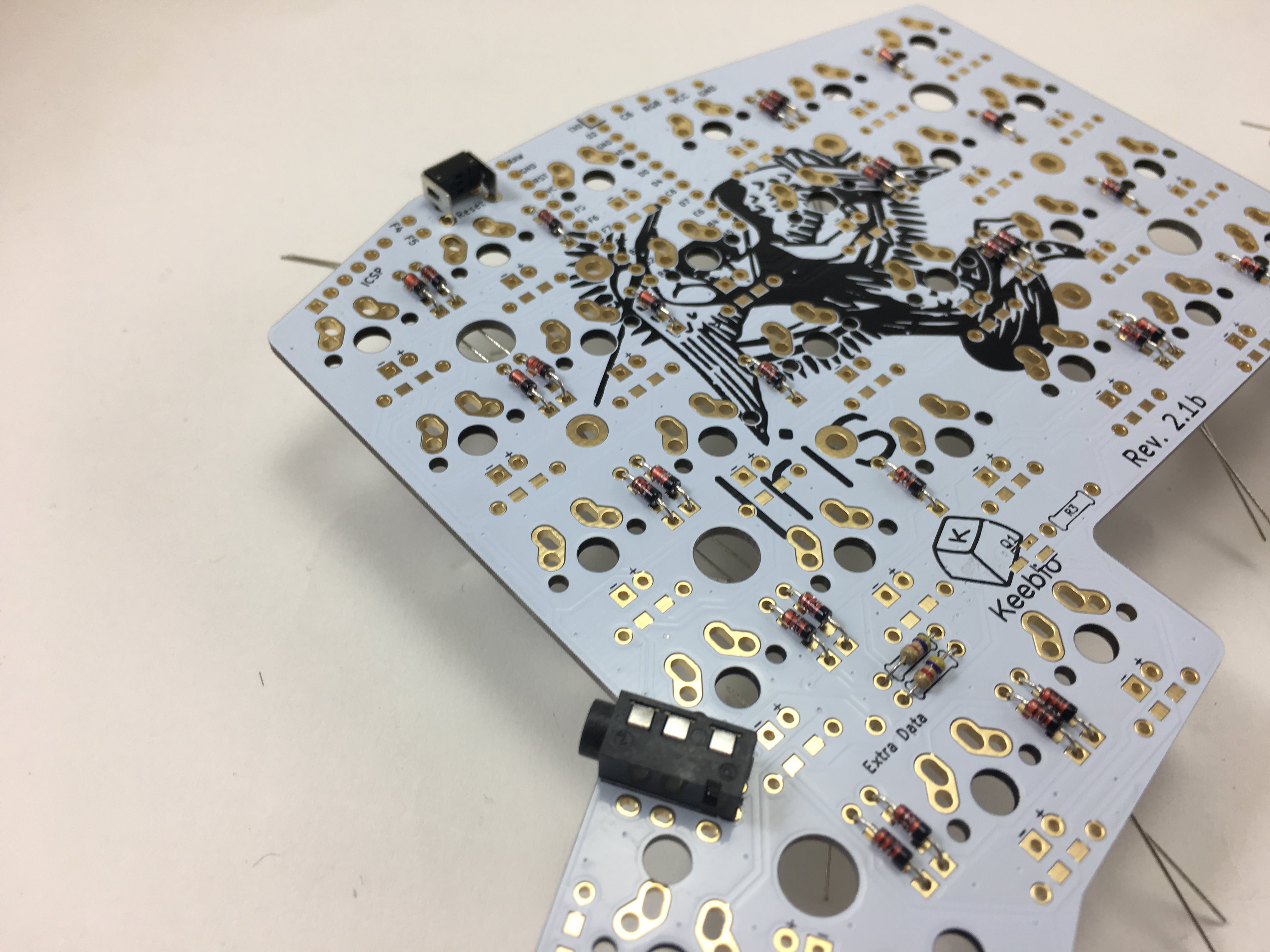 Make sure you clip down the leads for the jacks and reset switches after soldering them in, since there is not that much clearance between the top of the PCB and the switch plate. Failing to do this can make the pins touch the switch plate.

However, in the future, there might be additional parts that you can add, like a numpad, OLED screen, etc. To support this, the communication protocol would need to be switched over I2C, which can support multiple devices. To add support for I2C, all you need to do is add the 2 4.7kΩ resistors to one of the halves (other half does not need them). Also, it doesn't hurt to add these resistors if using serial communication.

tl;dr: Adding this is optional, but you might as well do it as it's only 2 more components to solder.

Add the 2 4.7kΩ resistors for I2C on only one half (I normally do this on the master/left half). Left half shown here: 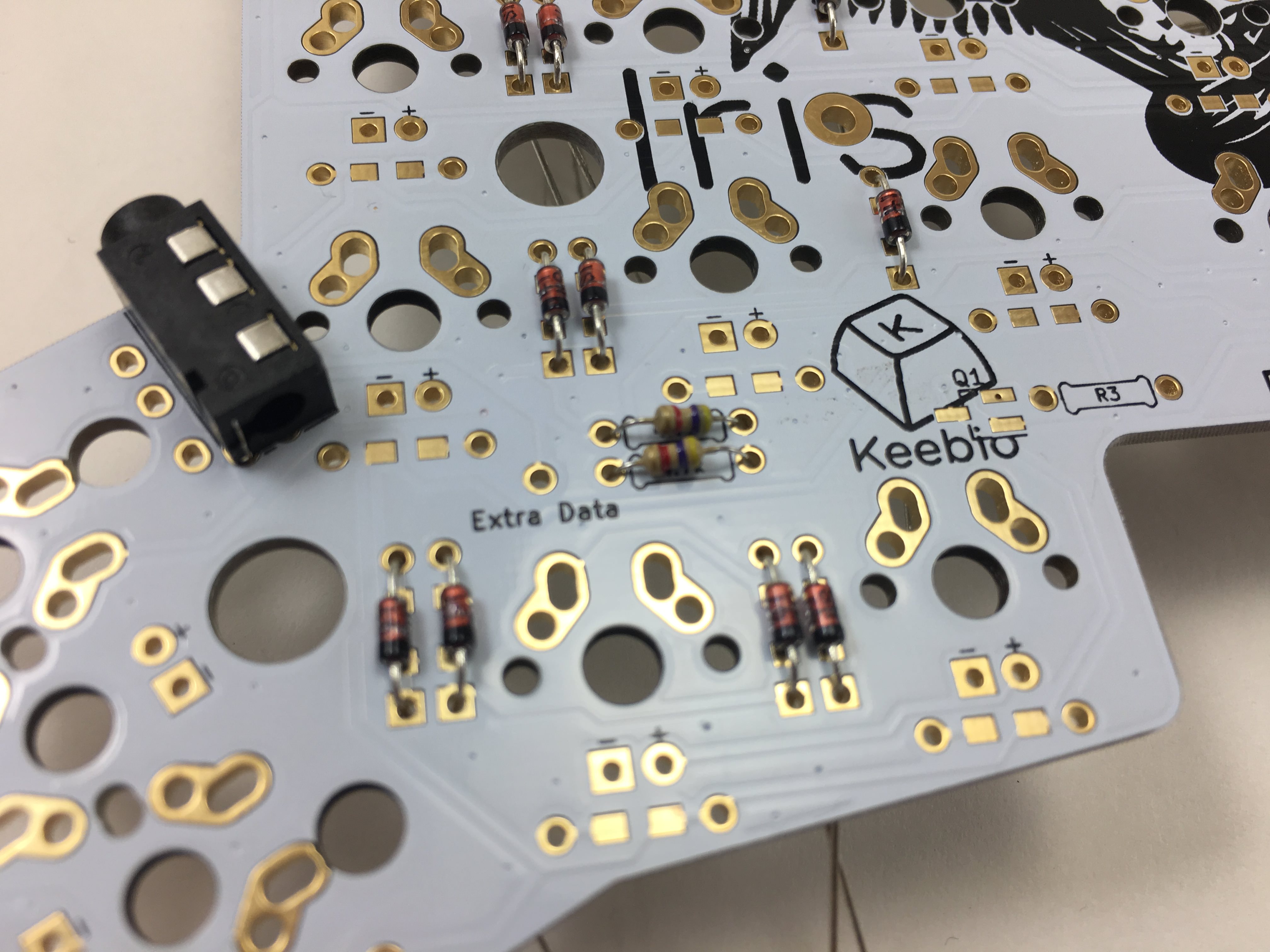 Add a 4.7kΩ resistor for LED support in the R3 slot: 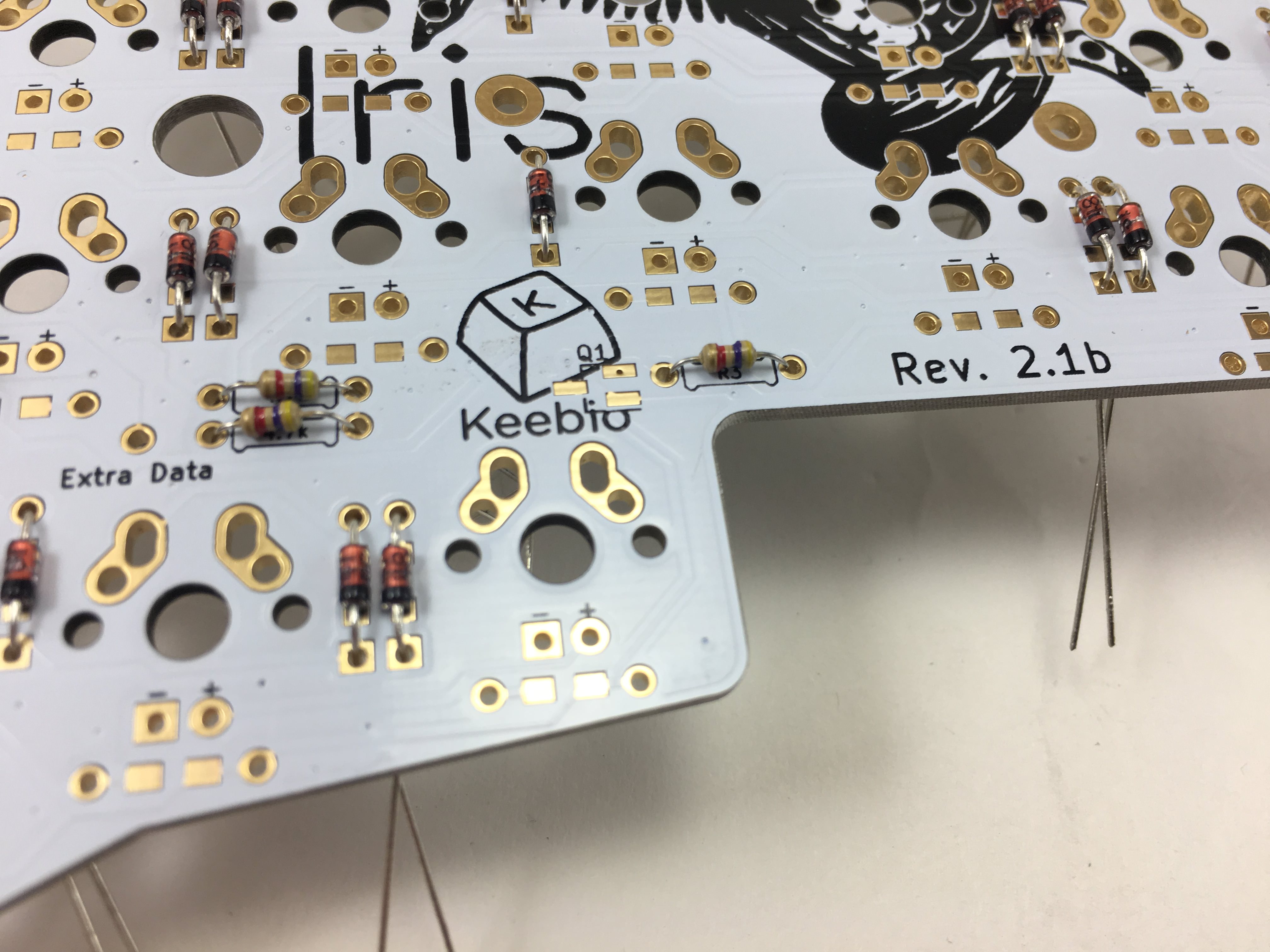 Add 470Ω resistors for LEDs. Resistors don't have polarity, so orientation doesn't matter. All of the resistor slots are oriented horizontally. 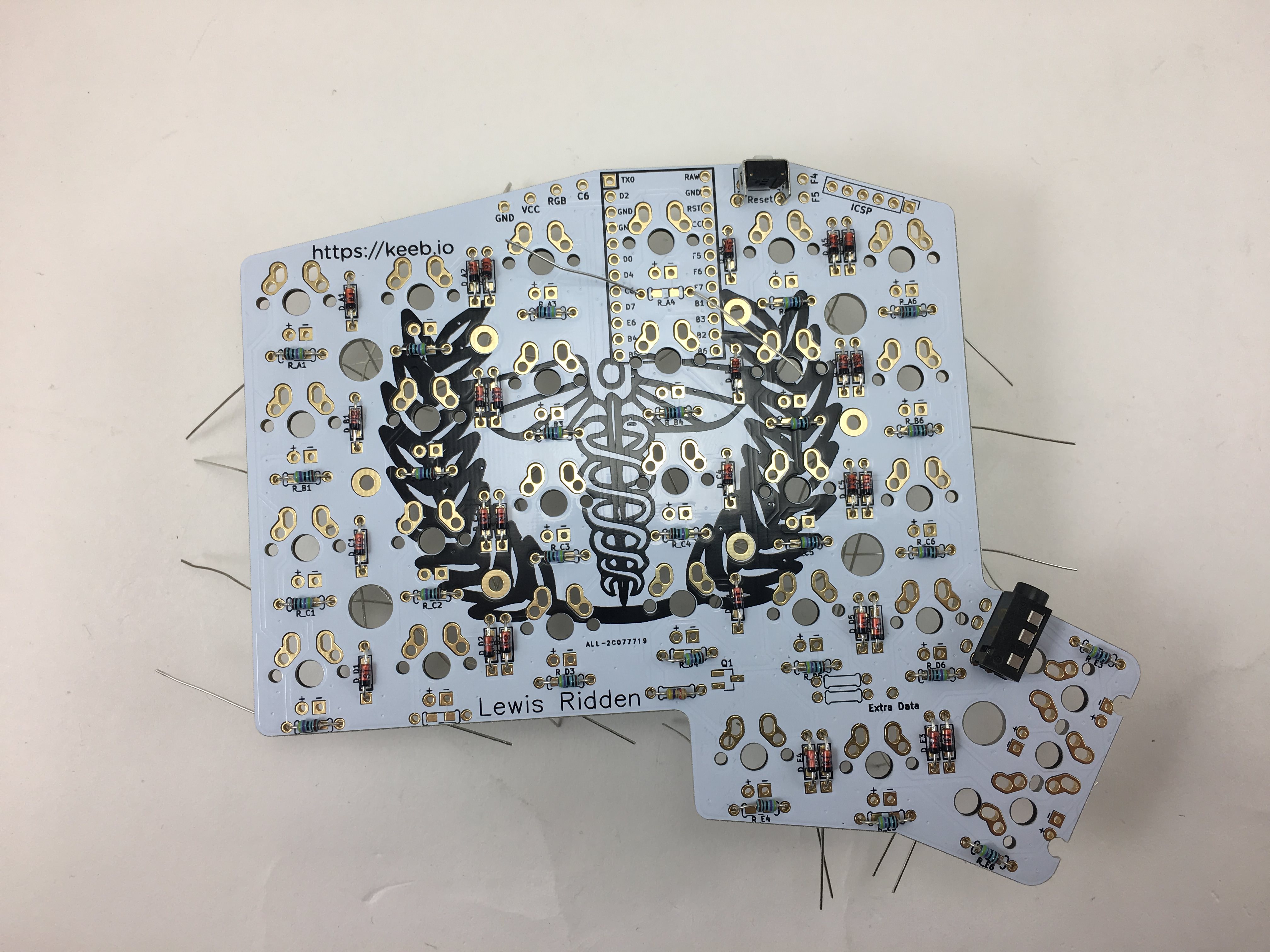 To add the MOSFET, tin one of the pins on the PCB first: 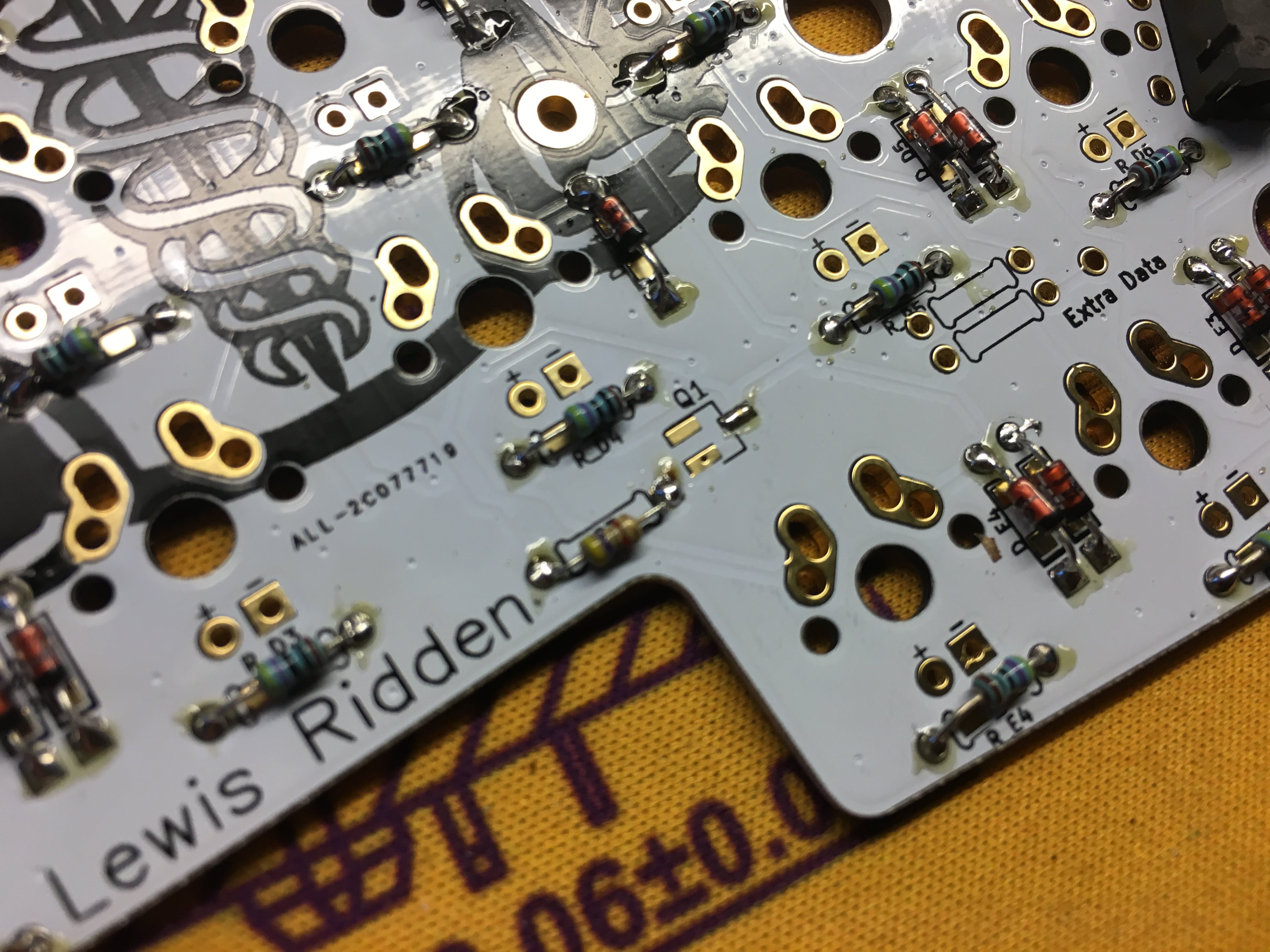 Hold the MOSFET with a pair of tweezers and align it over the footprint. Then solder the first pin: 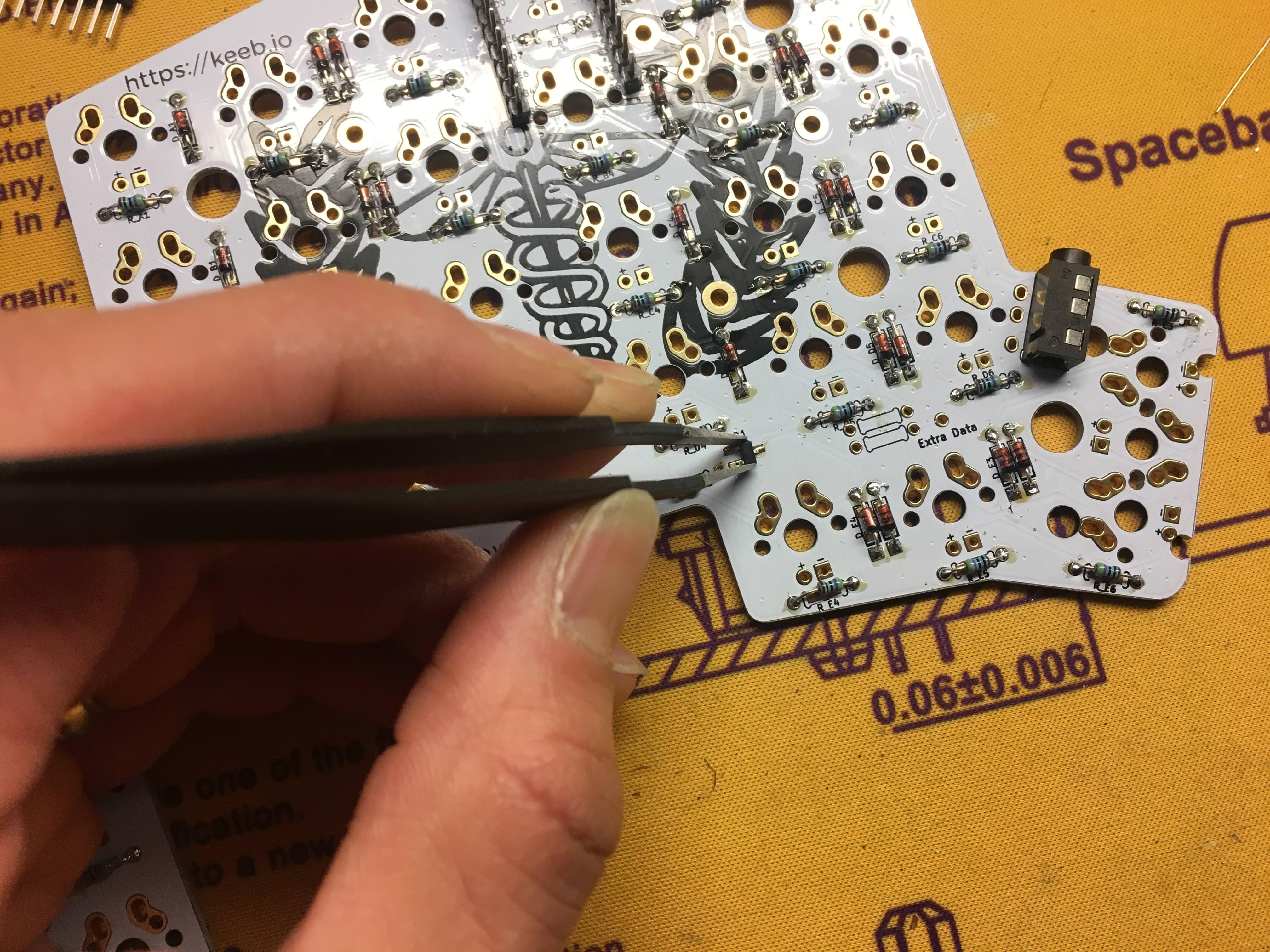 Once you're satisfied with the alignment, solder the other 2 pins: 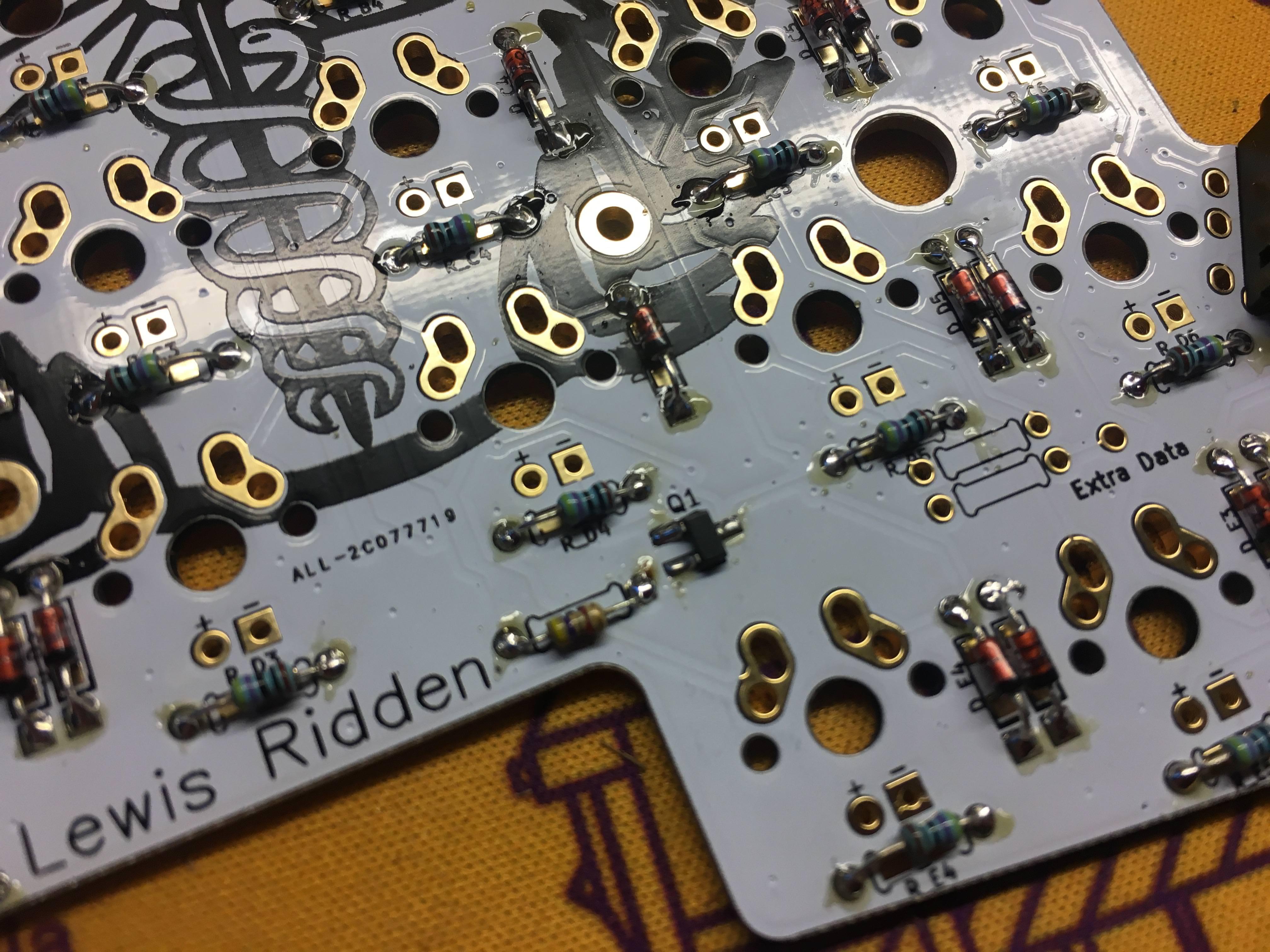 Repeat the MOSFET installation process on the other PCB: 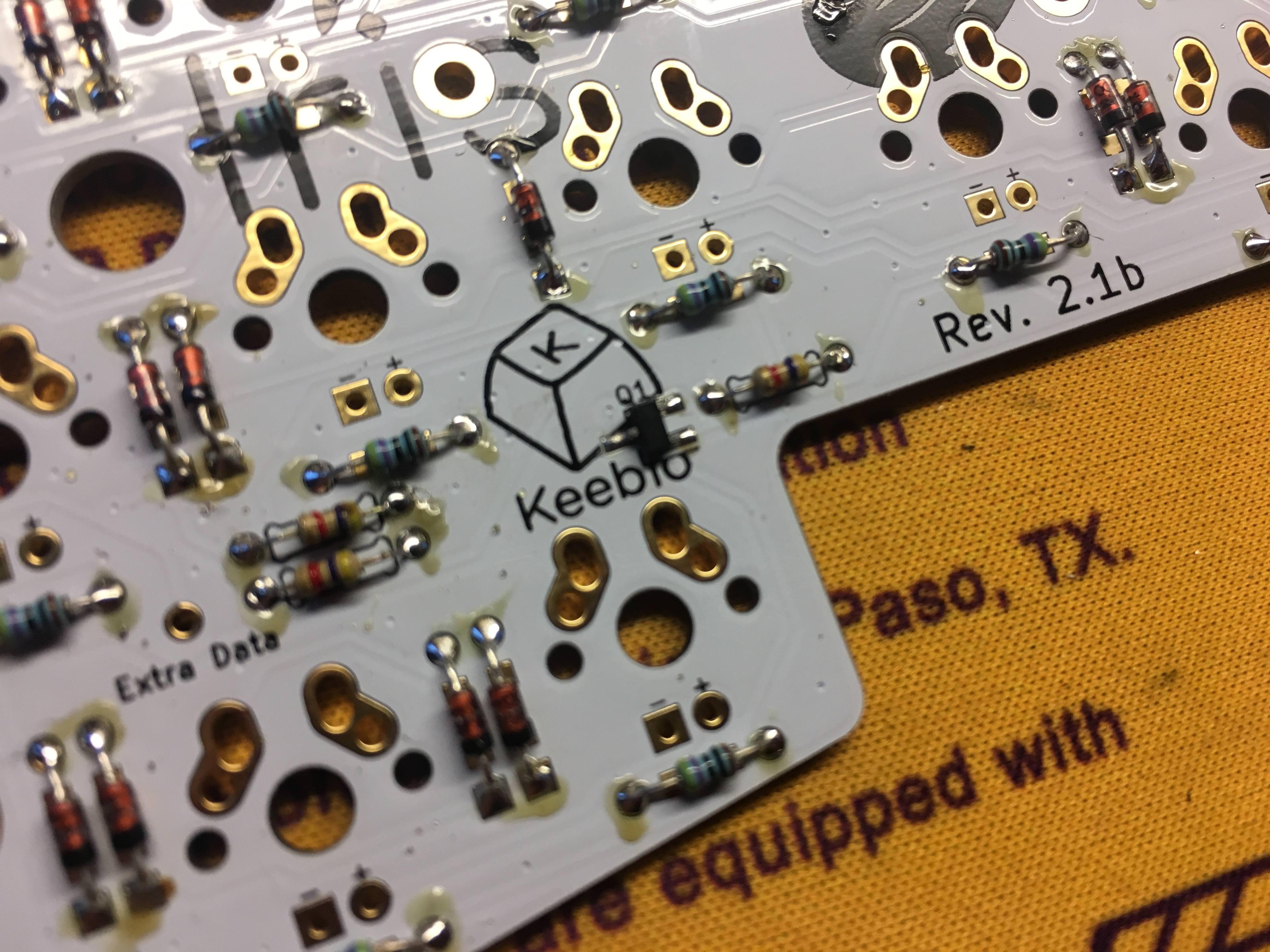 Install the header pins for the Pro Micro on the underside of the PCB (left PCB shown). You can use some tape to hold the header pins in place while soldering. Solder one pin on and re-adjust/re-solder as needed before doing the rest of the row: 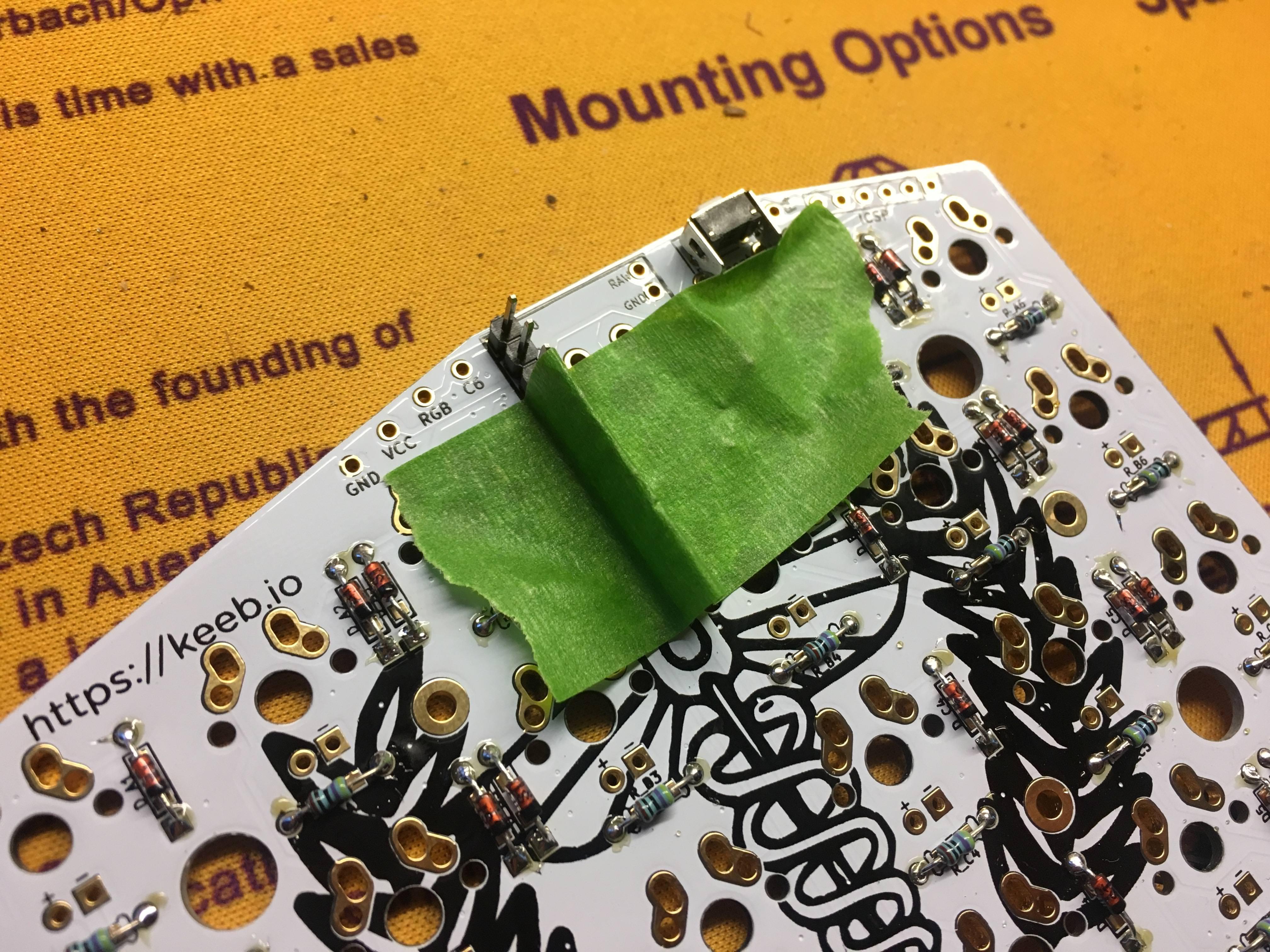 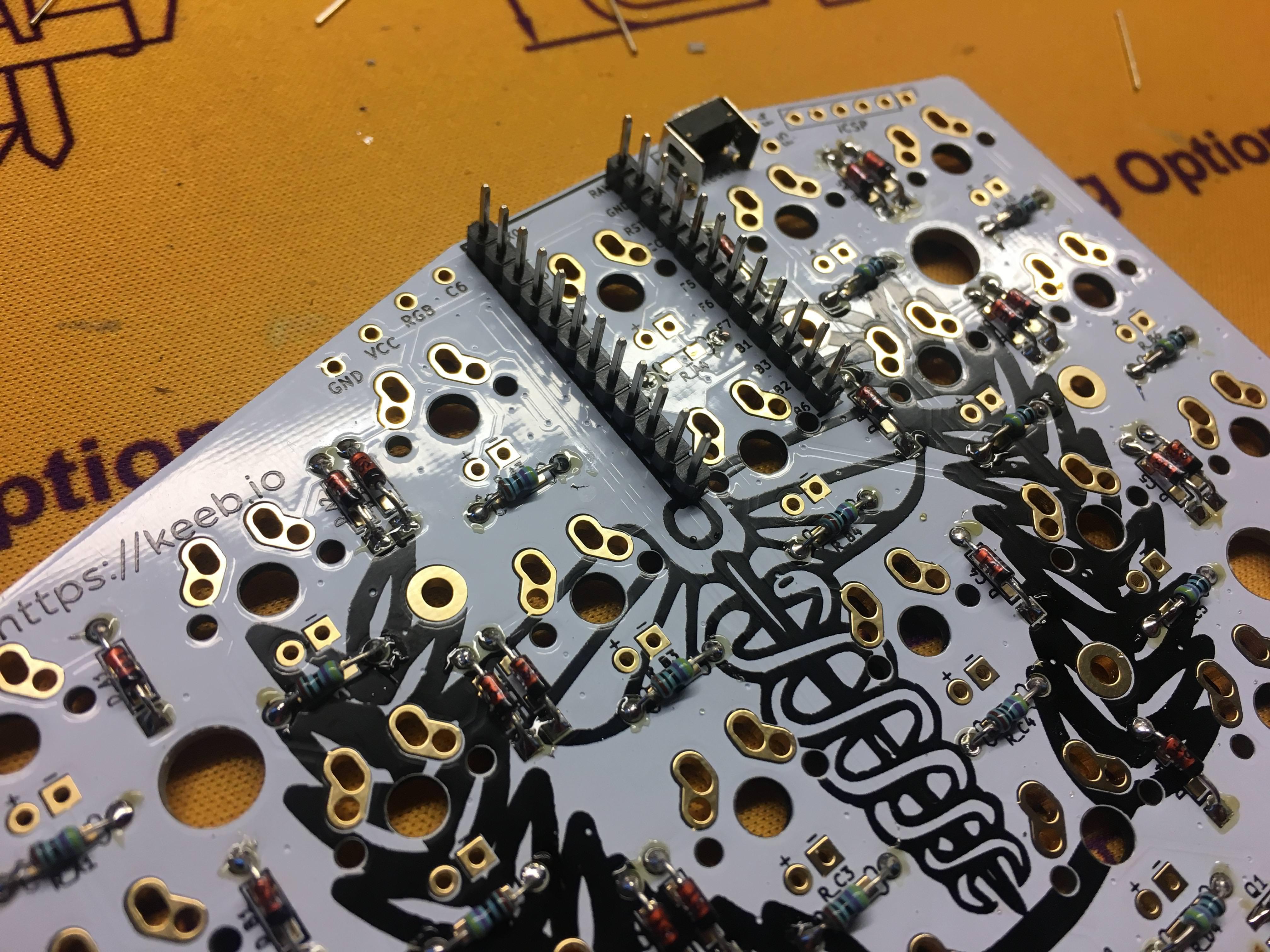 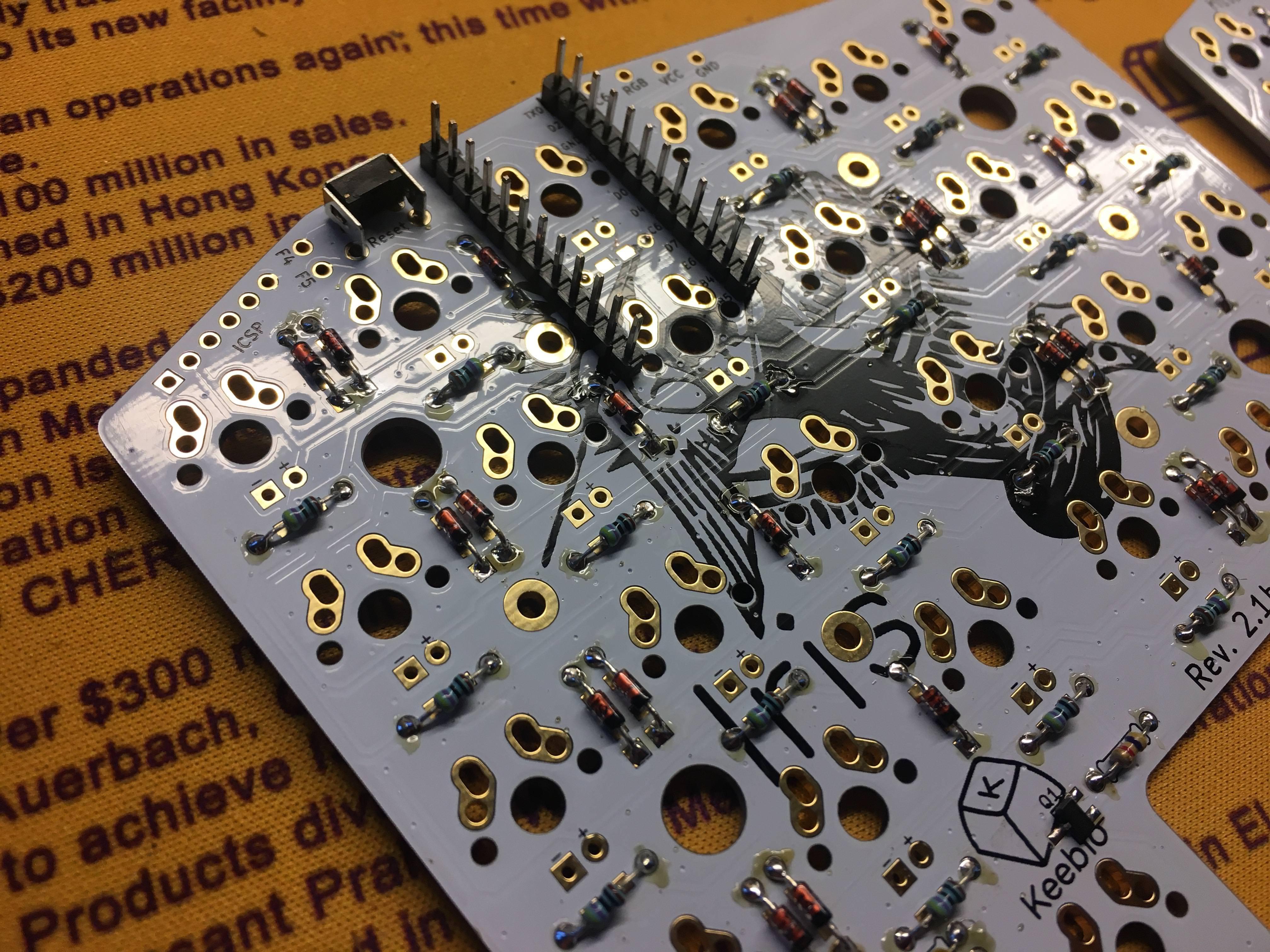 Prying off the plastic parts of the header pins to made the Pro Micro sit more flush with the PCB is suggested if you are up for it. An added benefit of this is that the Micro USB port for the left half is sandwiched between the Iris PCB and the Pro Micro PCB, making it less likely to be ripped off. 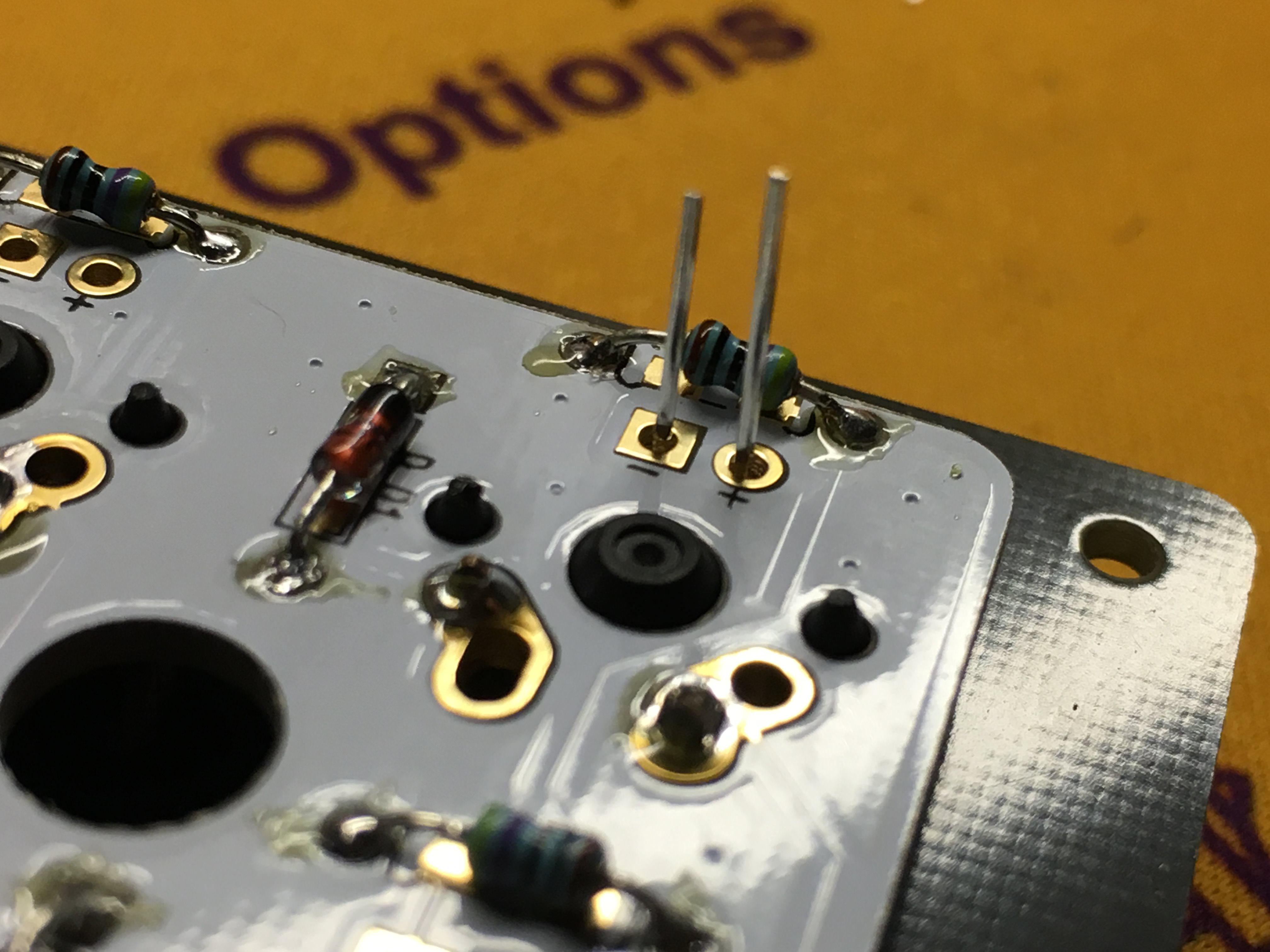 Trim down the switch pins, LED pins, and resistor pins that the Pro Micro will sit on top of with a flush cutter: 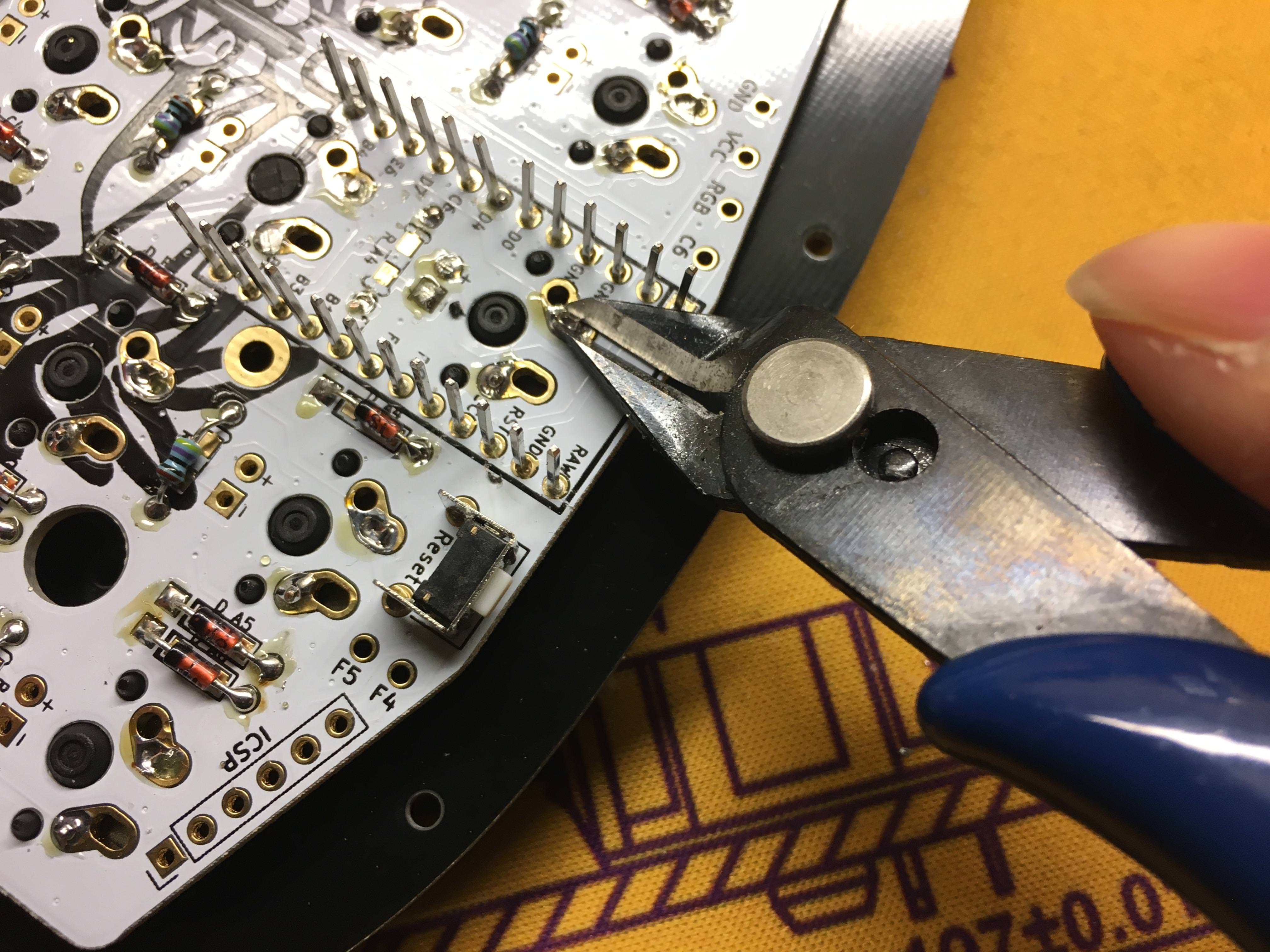 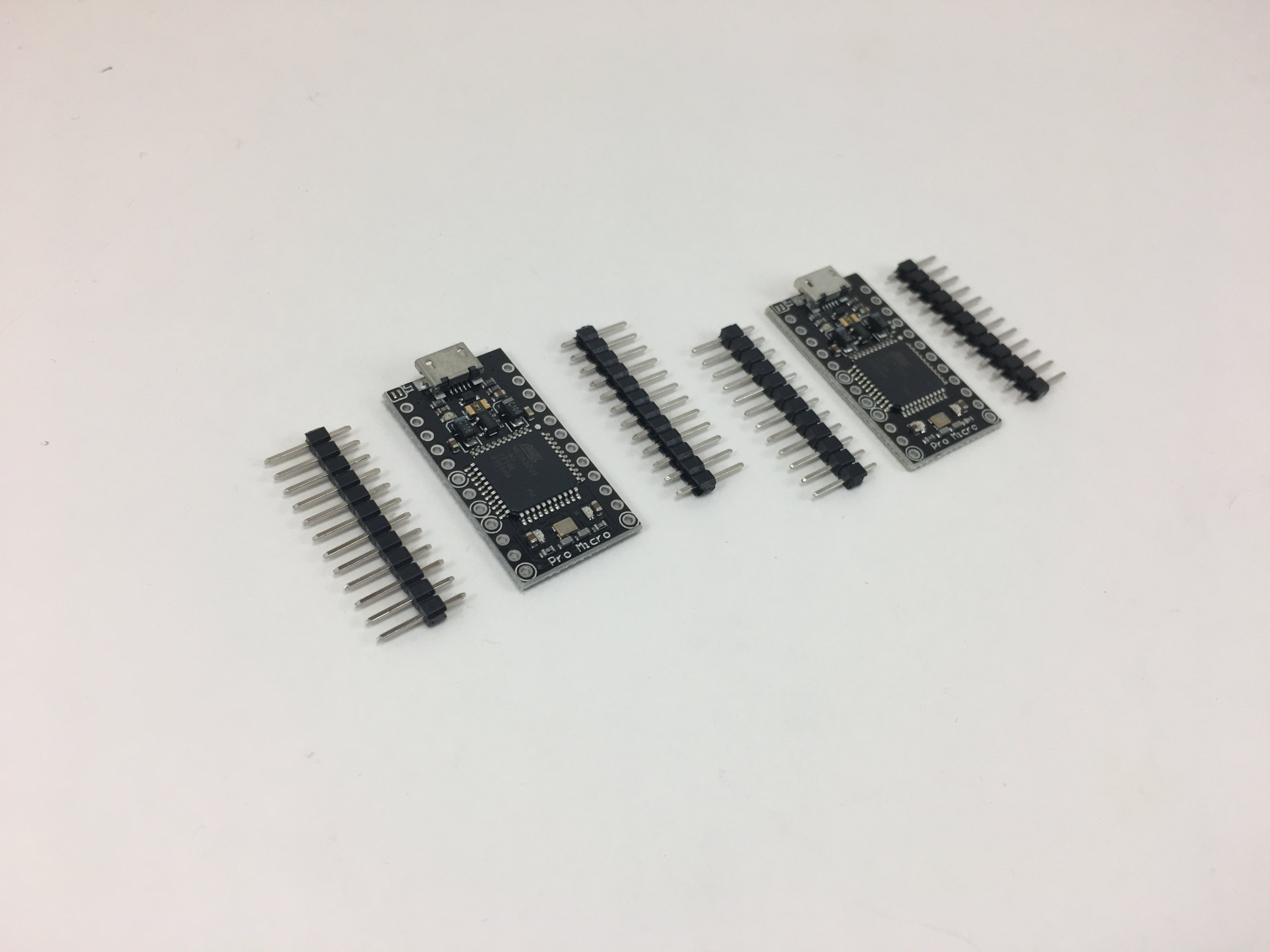 The last thing to install is the Pro Micros. Before soldering them to the board, it is highly recommended to flash them first, in case one or both of them are defective.

Refer to the Flashing Firmware Guide for steps on performing a flash to test the Pro Micro controllers.

If using a bottom plate that conducts electricity, like a stainless steel or aluminum plate, add Kapton or electric tape on top of the TRRS jack. Also put some down where the Pro Micro will be: 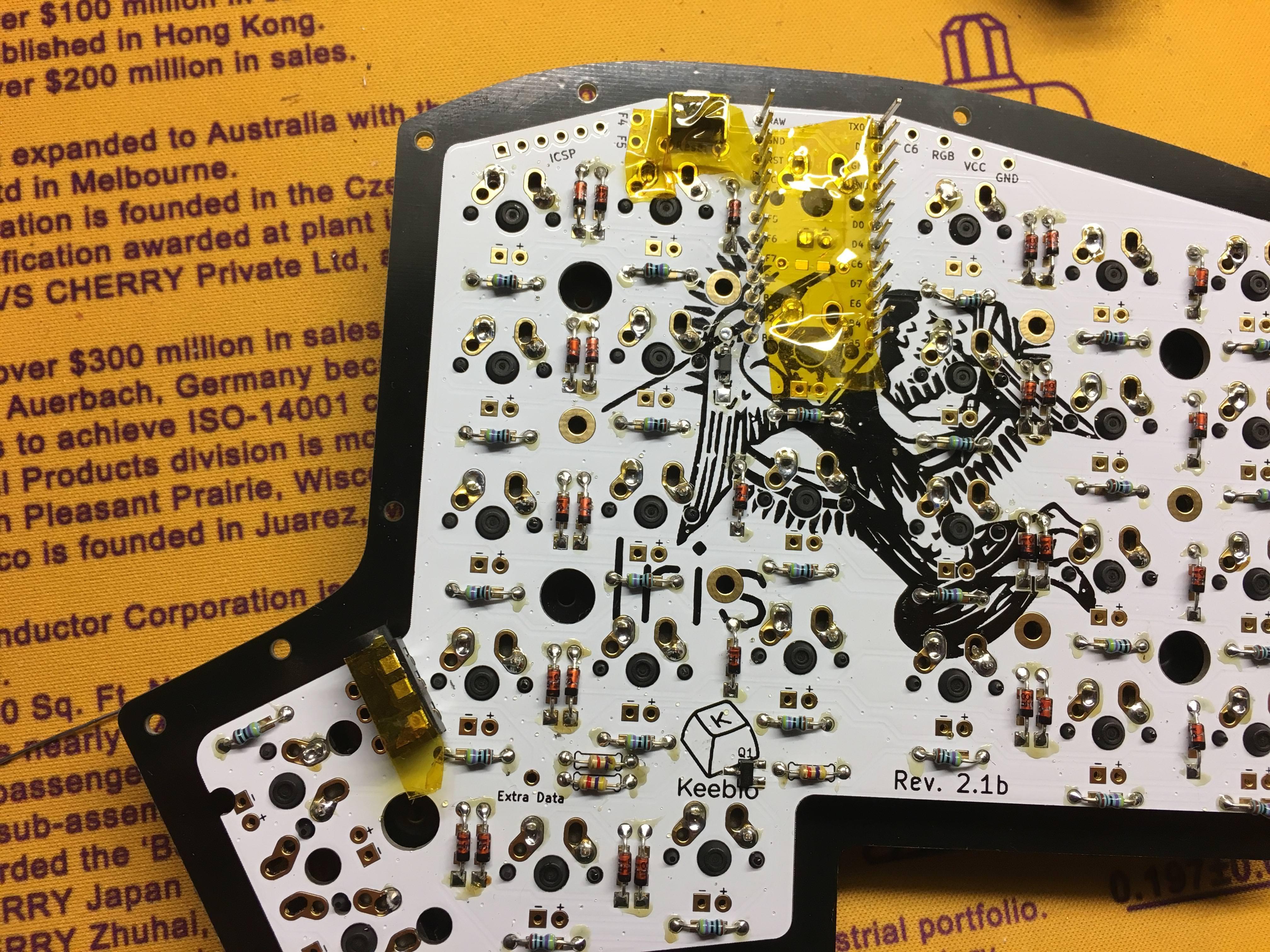 Set the Pro Micro through the pins, making sure RAW and TX0 are aligned properly with the markings on the PCB. The orientation on both PCBs is different. (Left half shown here): 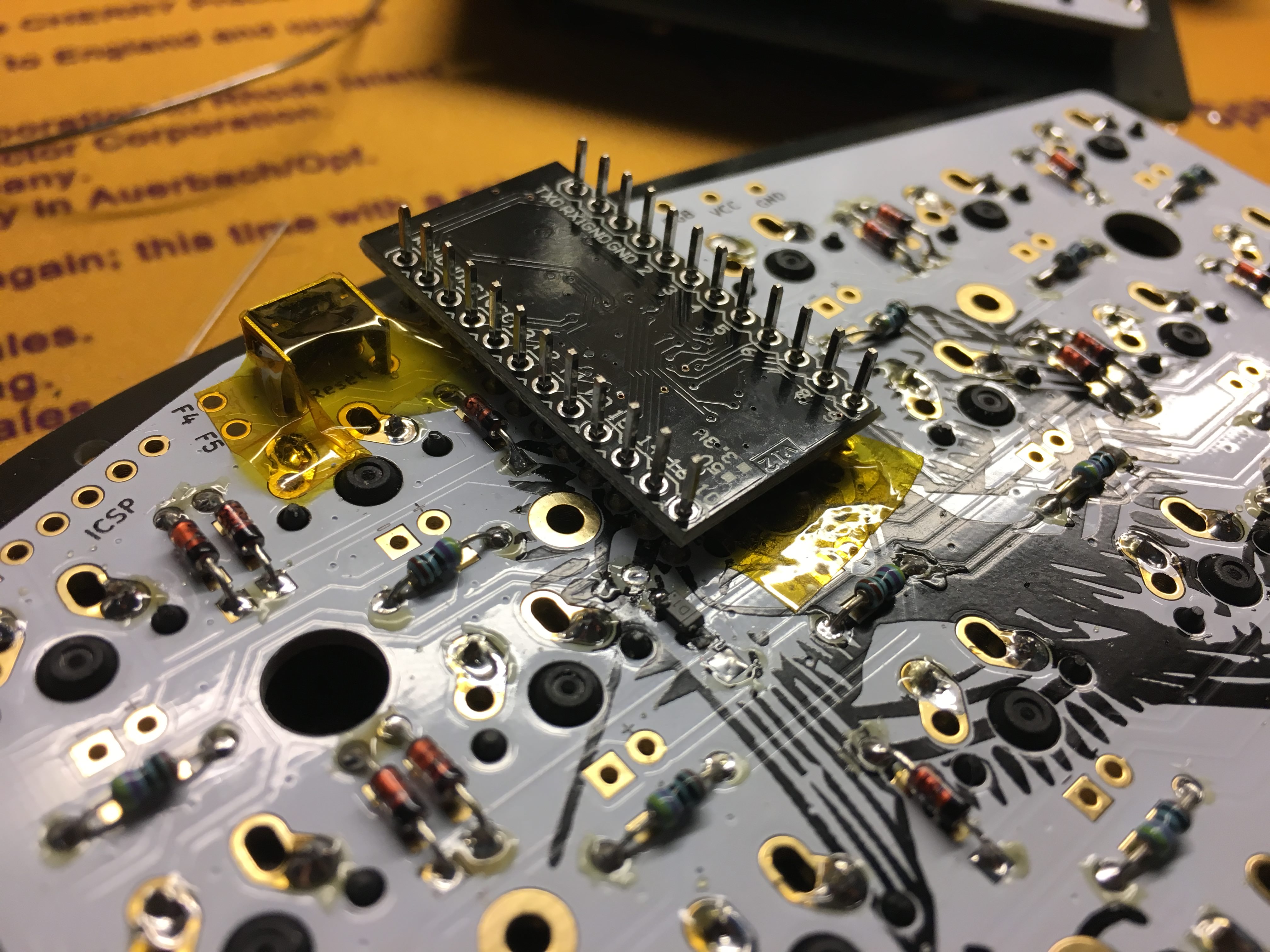 MYTH: Keys will be reversed if the Pro Micro is reversed

TRUTH: This is totally not the case, so pay attention! Soldering the Pro Micro on backwards will short VCC and Reset together, preventing you from flashing. Even if flashed beforehand, it will do nothing meaningful in this orientation. 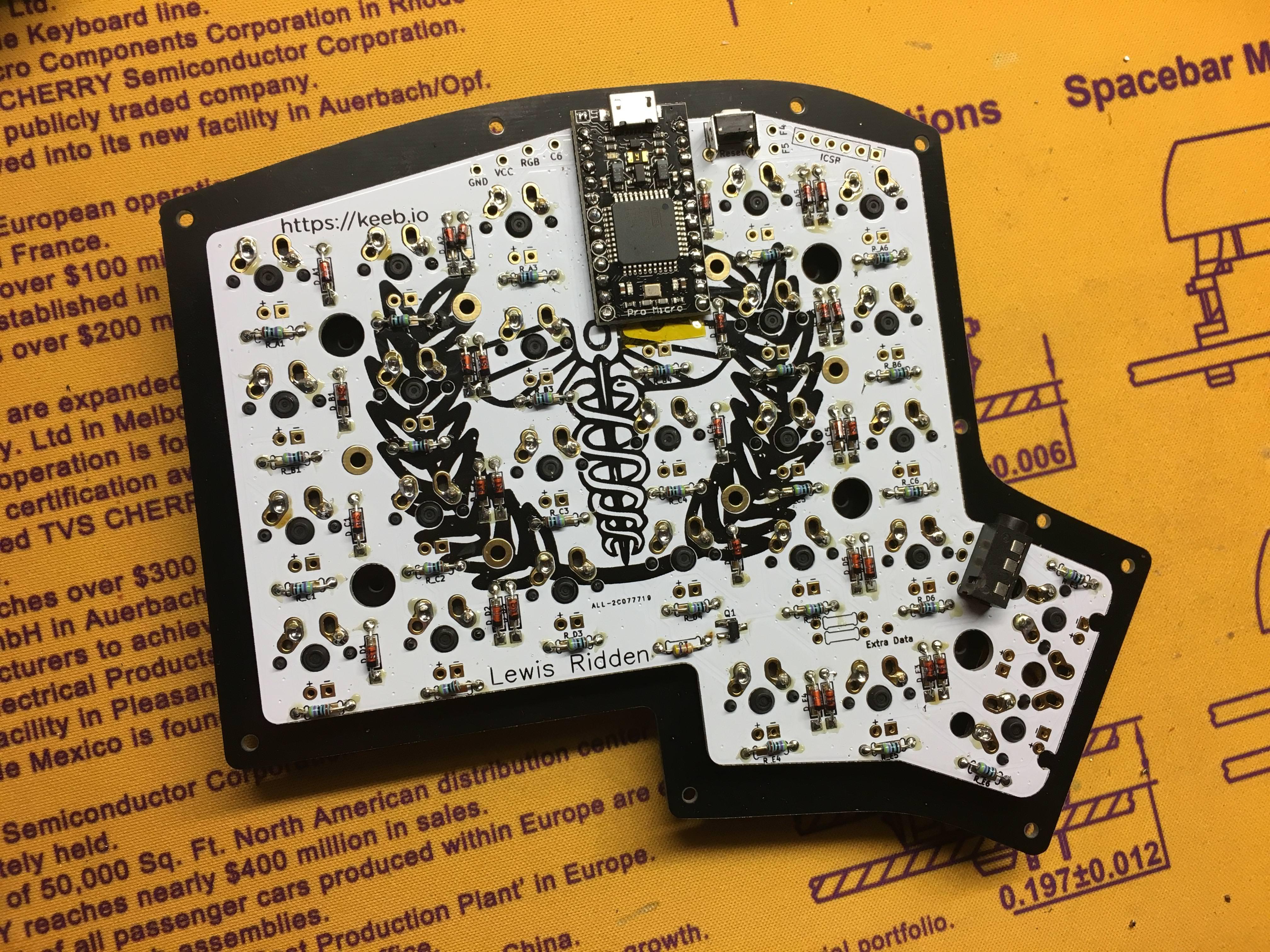 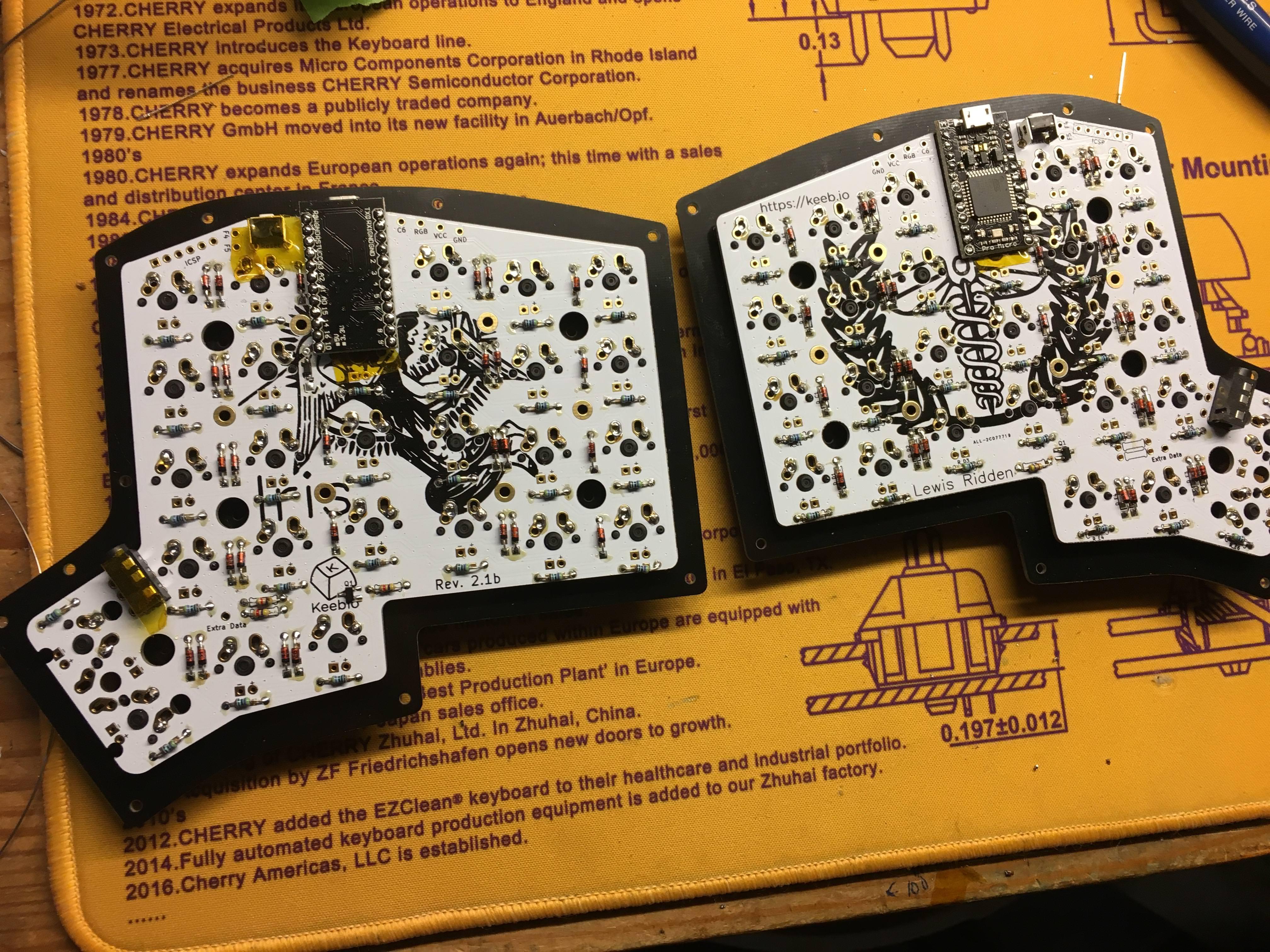 Refer to the Adding RGB Underglow Guide for steps to install the RGB light strip.