Pictures to be added soon using Quefrency/Sinc PCBs! For now, Iris pictures will be used, but the build is essentially the same.

Here's a list of parts needed for the build:

Here's a summary of the build steps:

Add 2u stabilizers to PCB 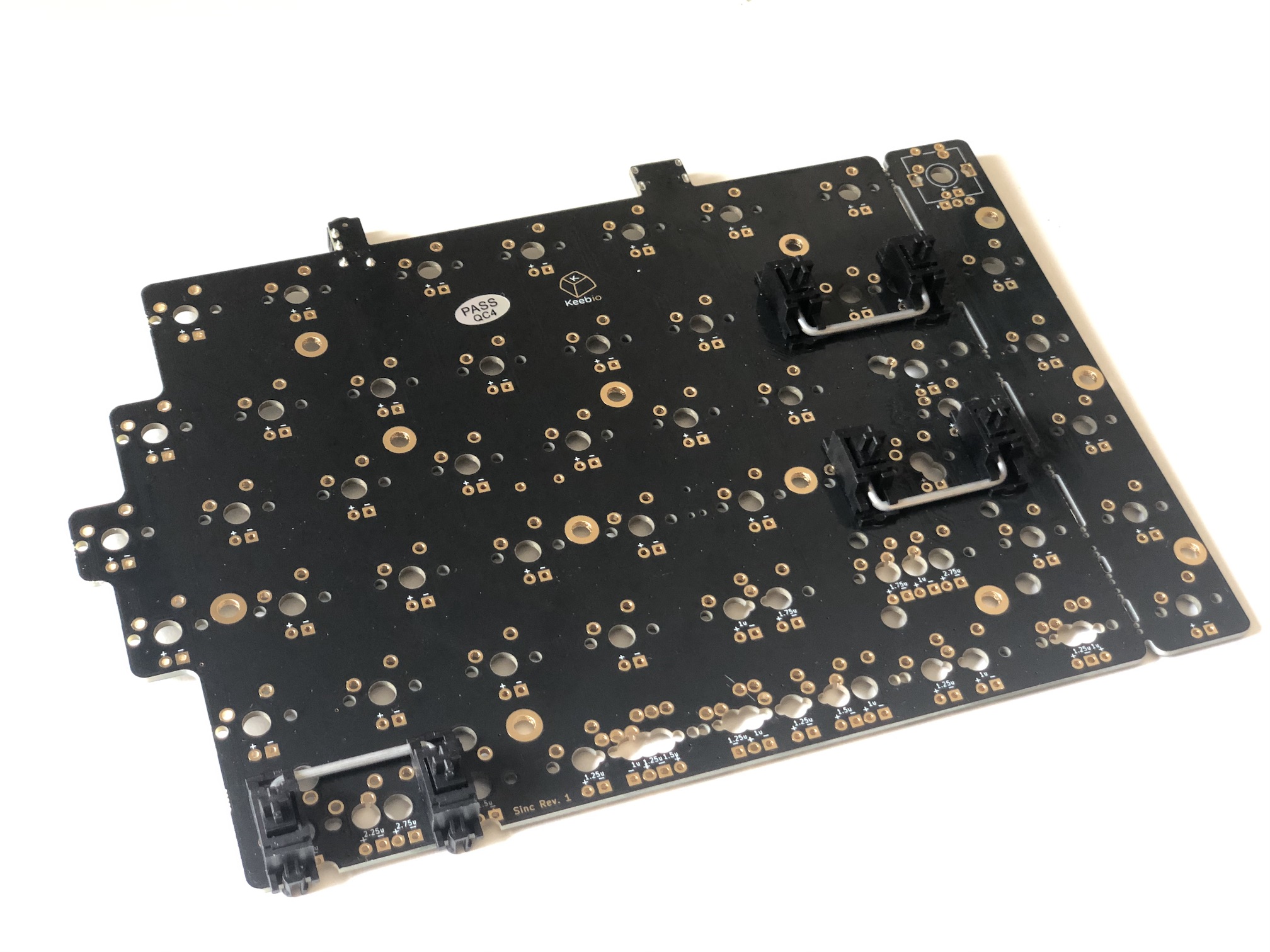 Afterwards, fit the plate over the stabilizer. 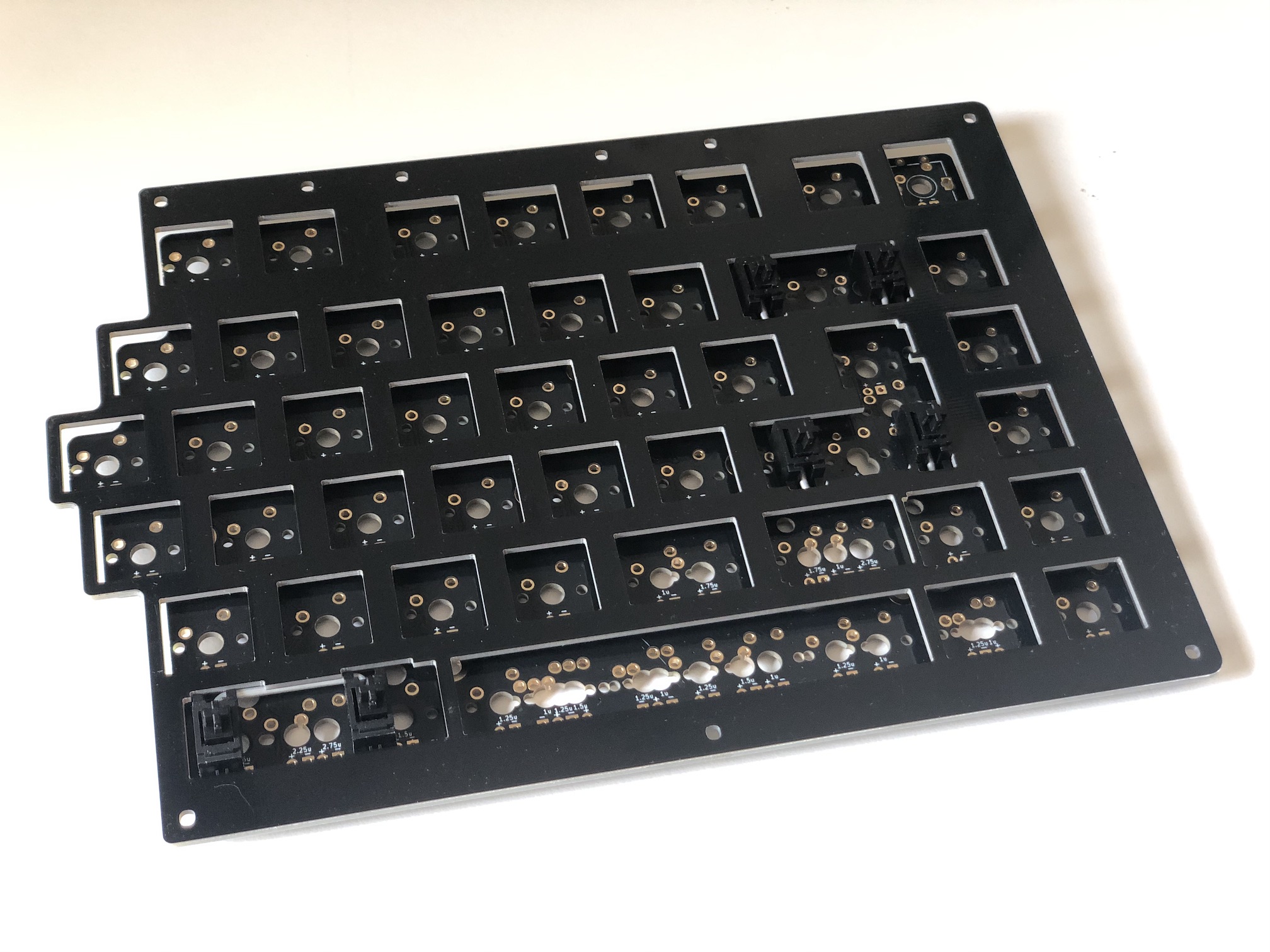 For Kailh Box and Kailh Choc switches, there is no cutout to insert in-switch LEDs through, so the LEDs must be added first. Skip to the LED installation step and then come back to this step of switch installation.

Add switches into the switch plate. It's a good idea to add switches to the corners first and then solder them before installing the rest of them: 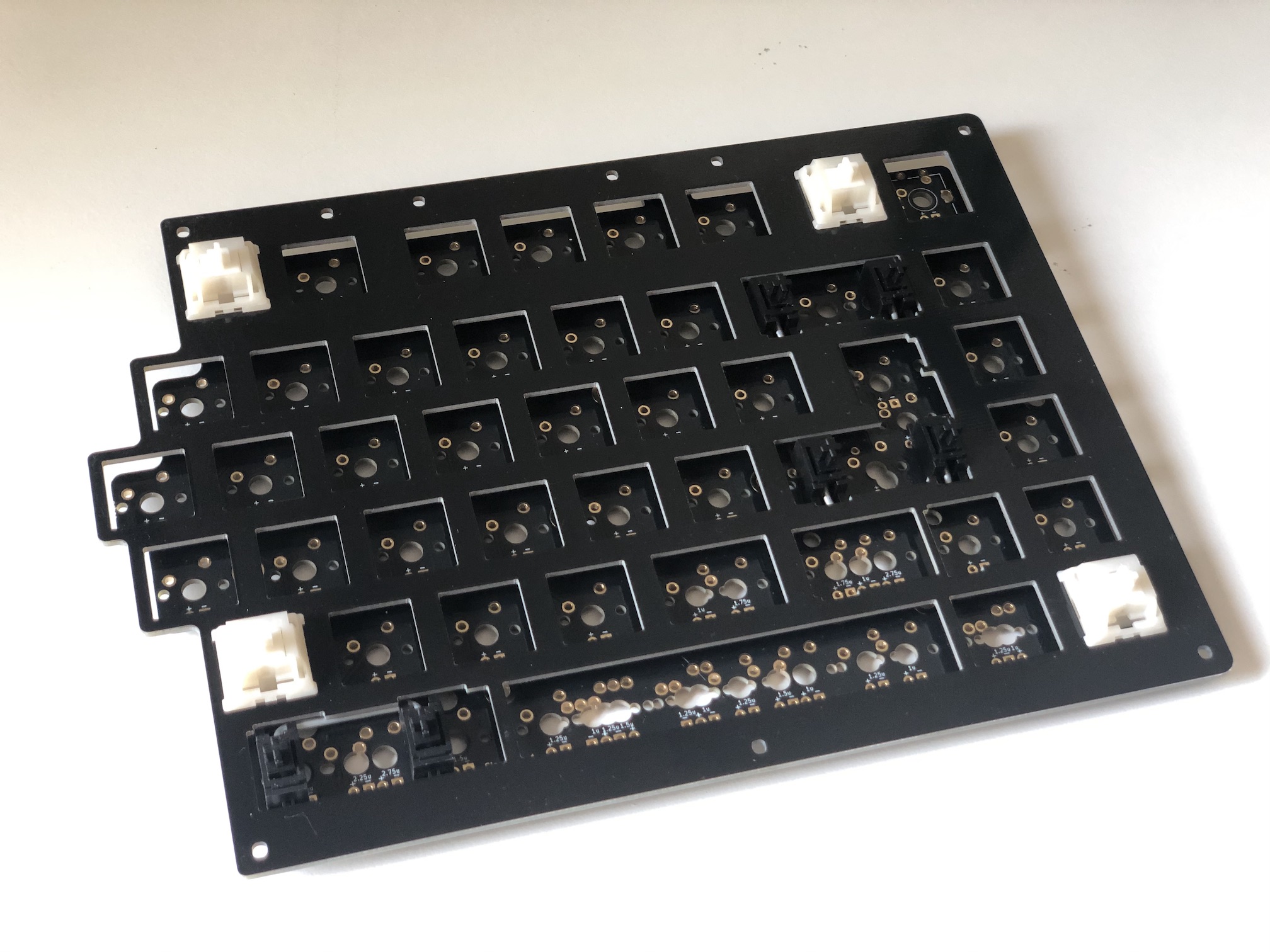 Solder the switches onto the PCB.

Add the rest of the switches and solder them: 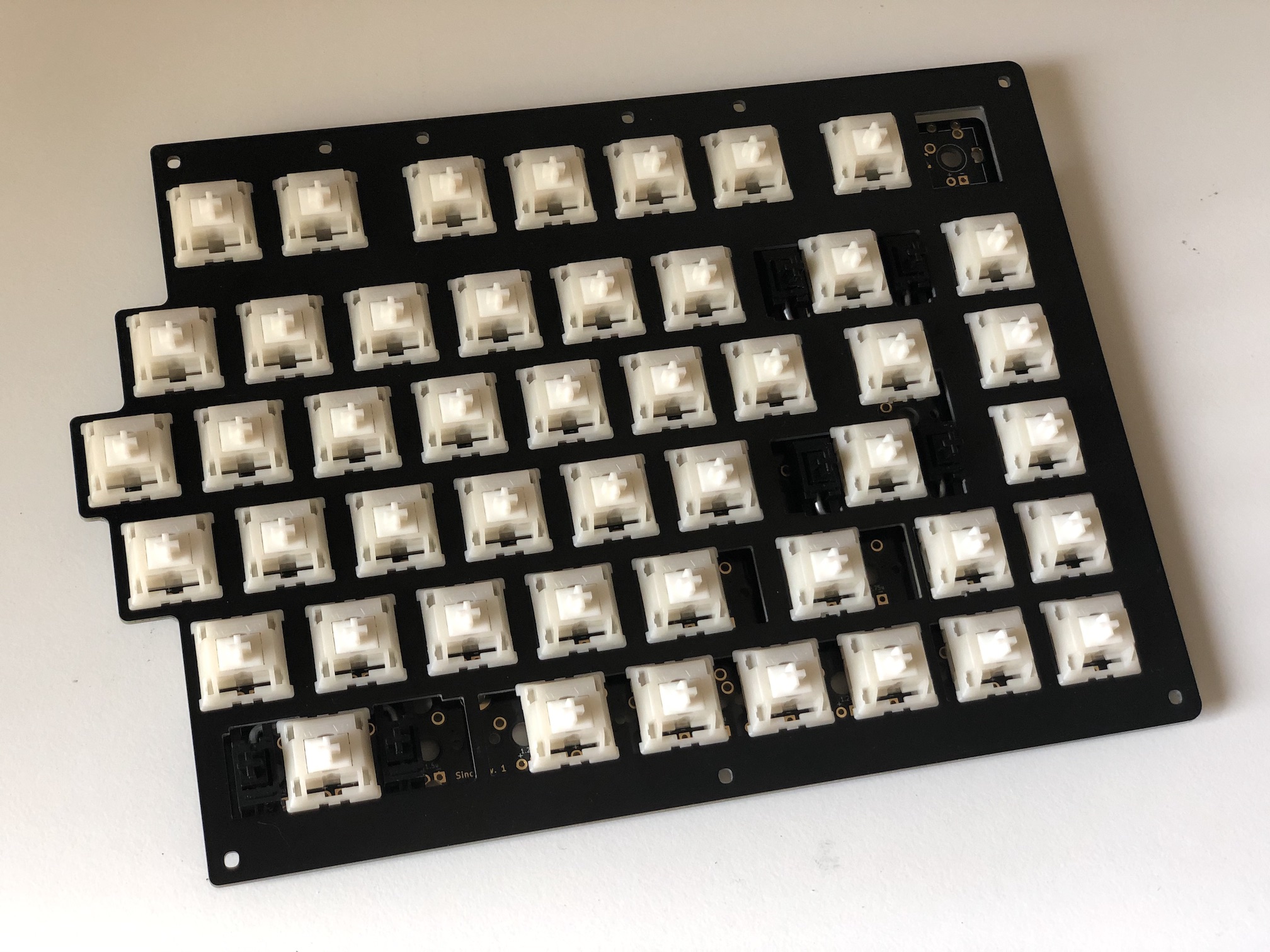 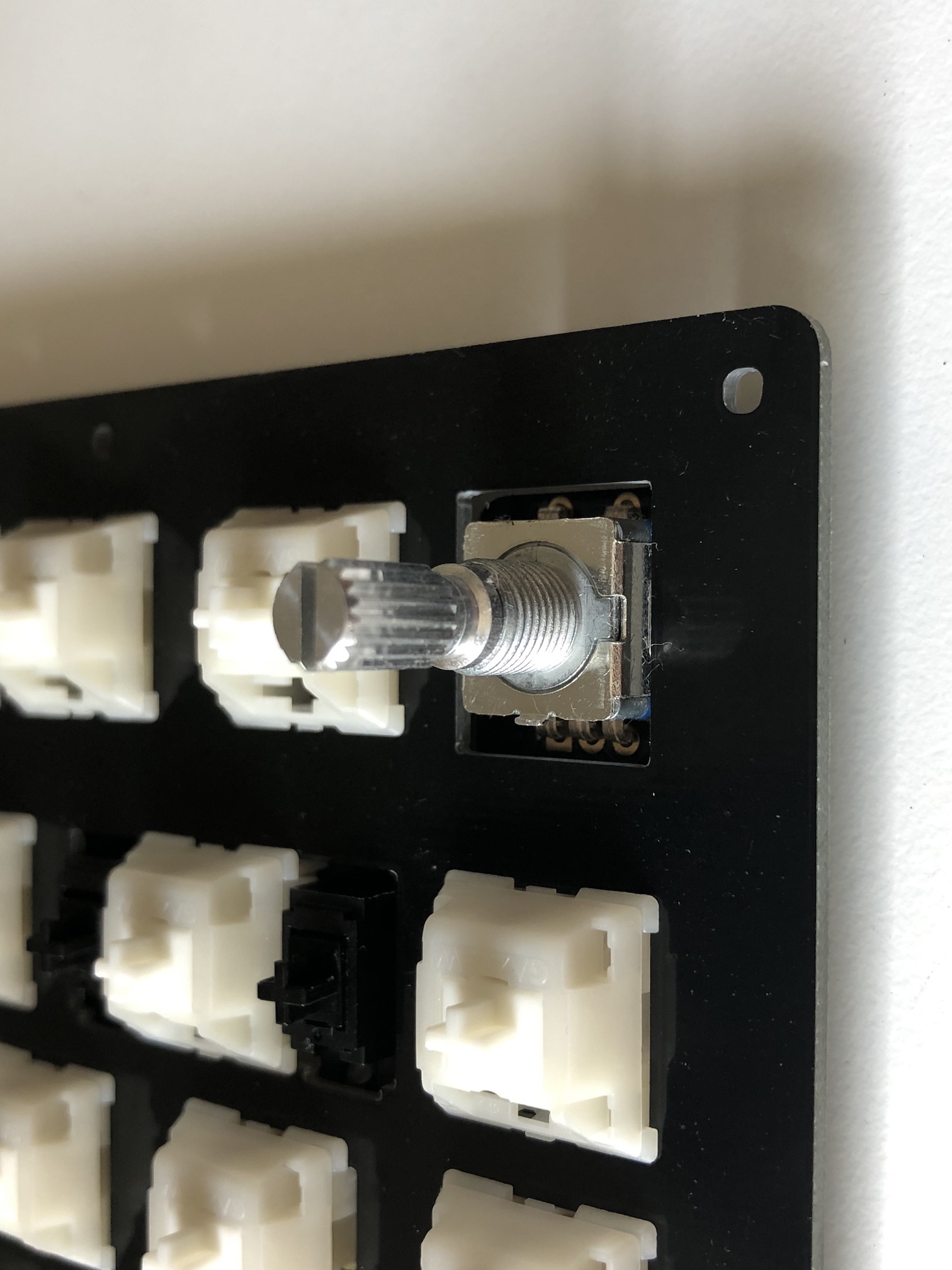 Polarity of the in-switch LEDs is important. Match up the longer leg of the LED to the + sign of the LED pins on the PCB: 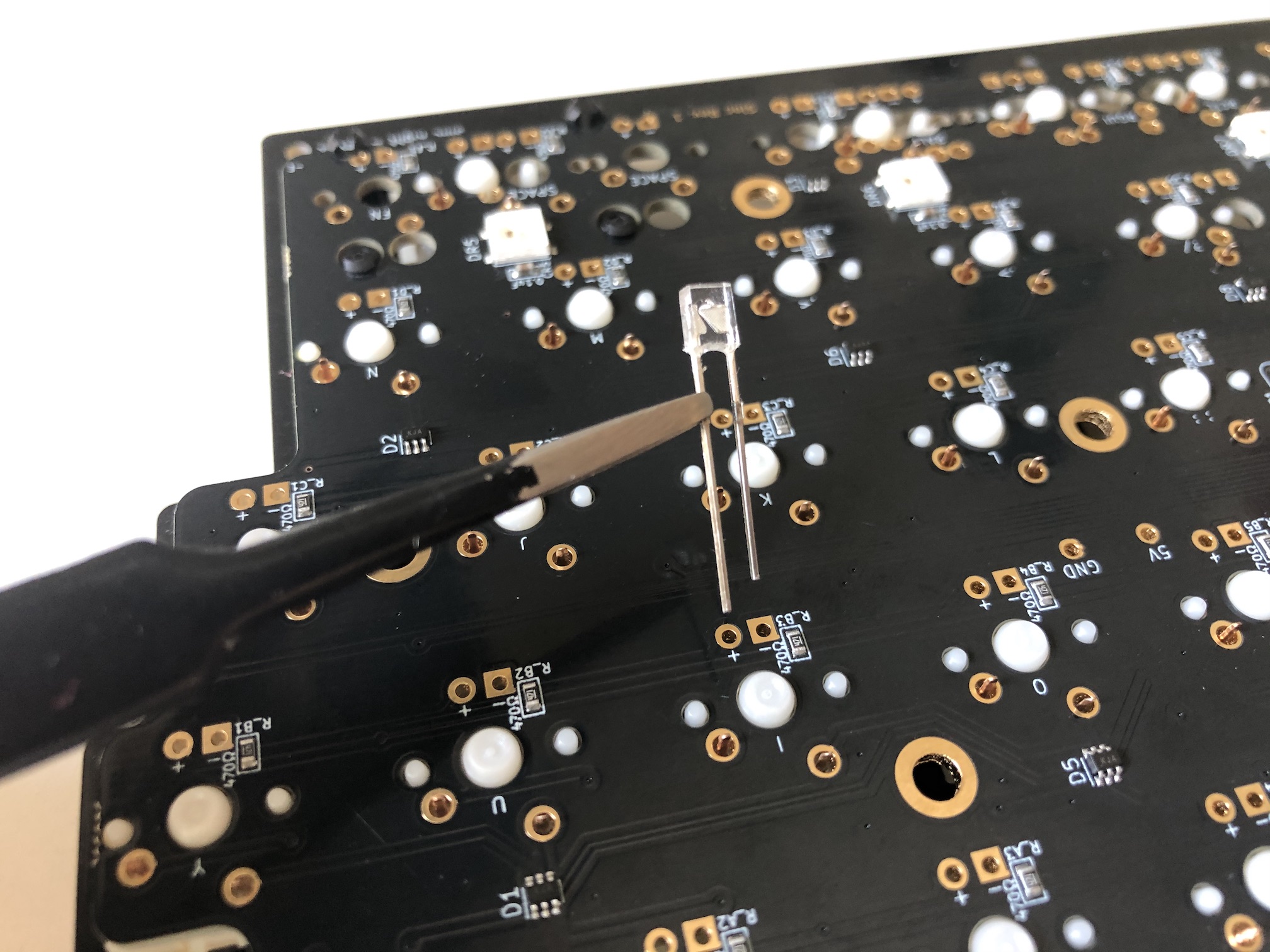 Insert the LED through the switch and PCB: 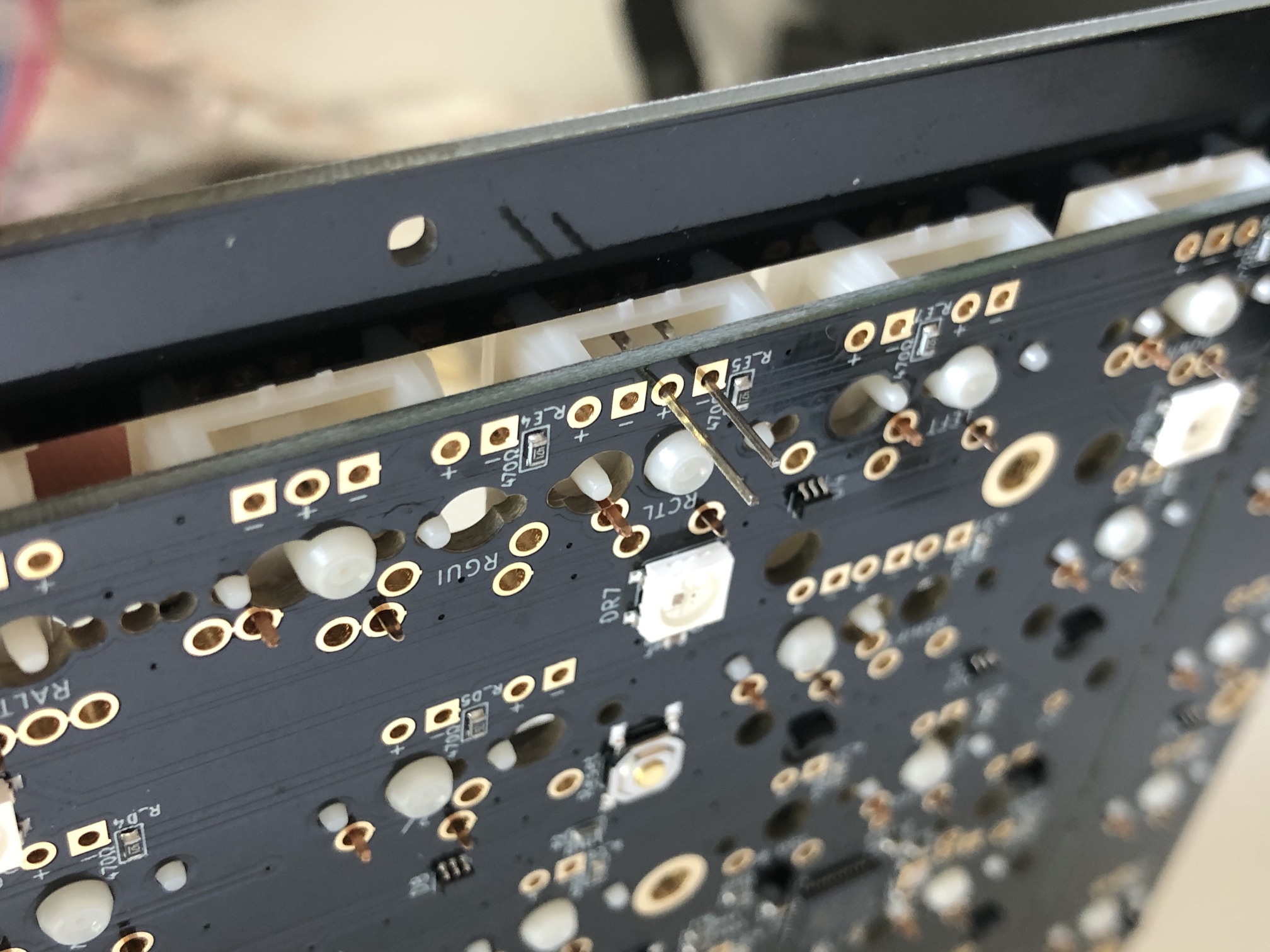 Bend the LED legs out so it doesn't fall out while soldering the LED in: 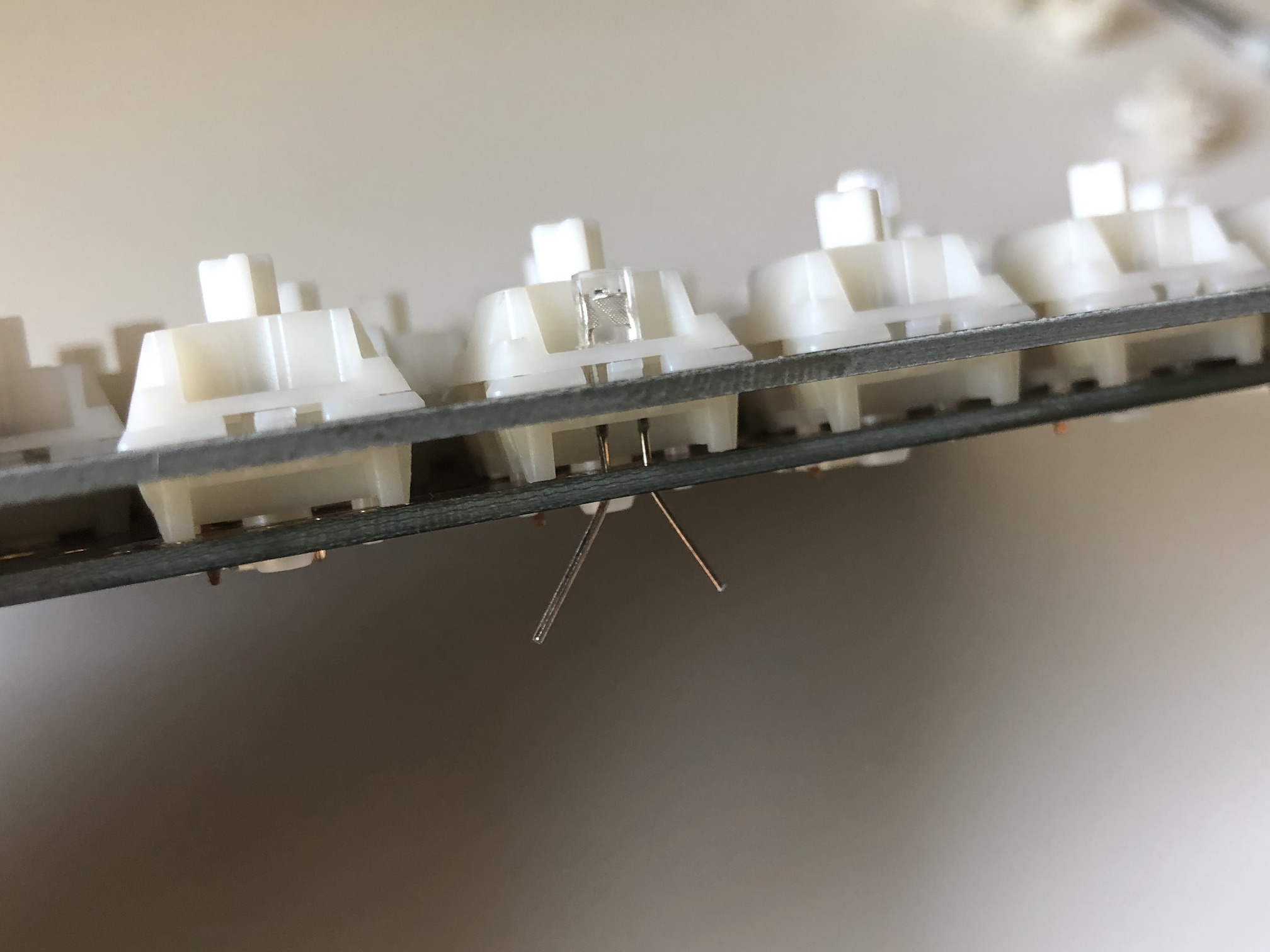 Solder the LED legs and then clip the excess length on the legs. Be careful to not damage the resistor next to the LED pads.

Note that some of the switch layout options have the -/+ markings swapped, so make sure to always put the longer leg through the + pad. If you are unsure, plug the PCB in and test the LED before soldering it in. 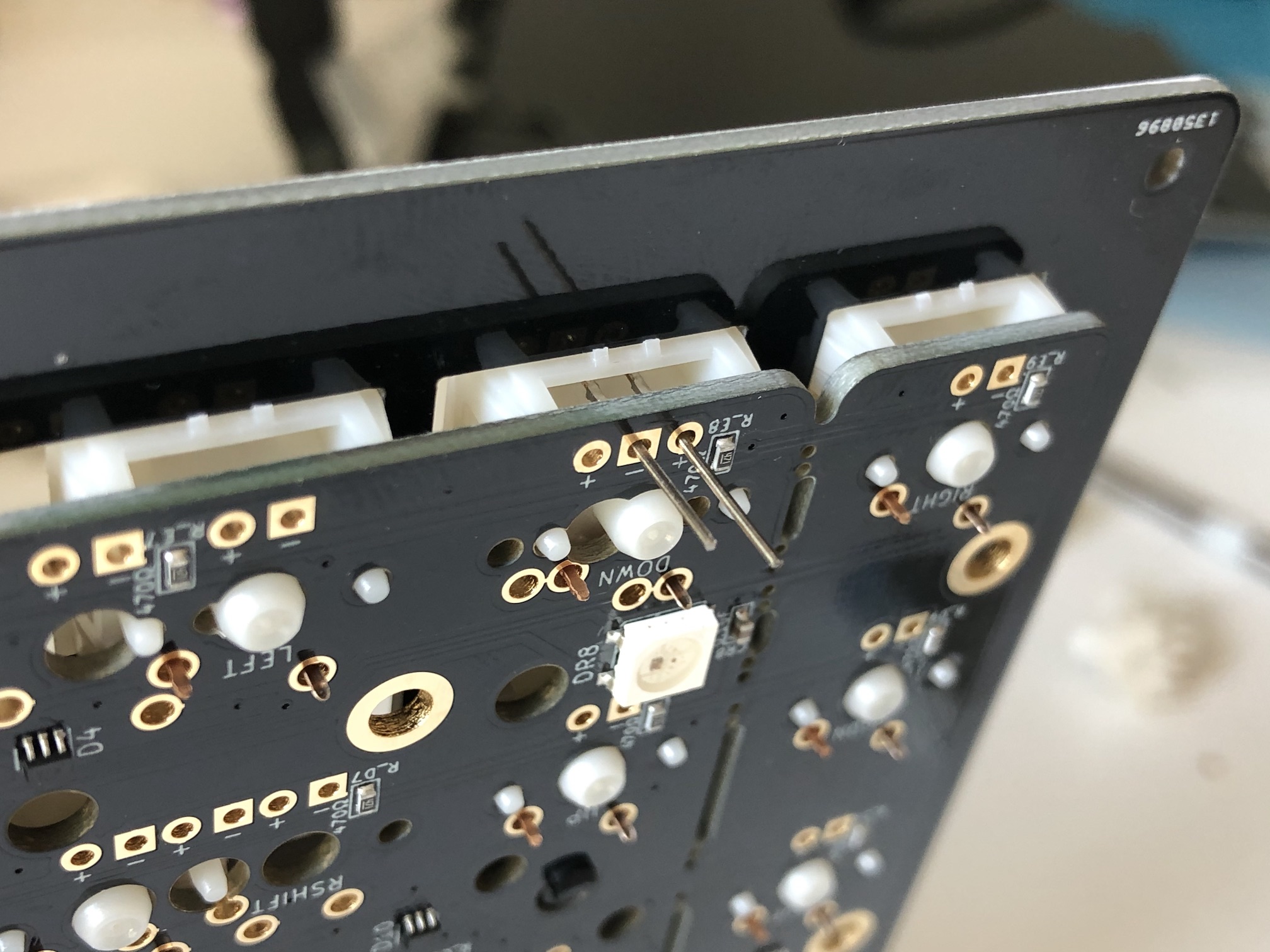 Insert a screw through the top of the switch plate and attach a standoff from the bottom side of the plate: 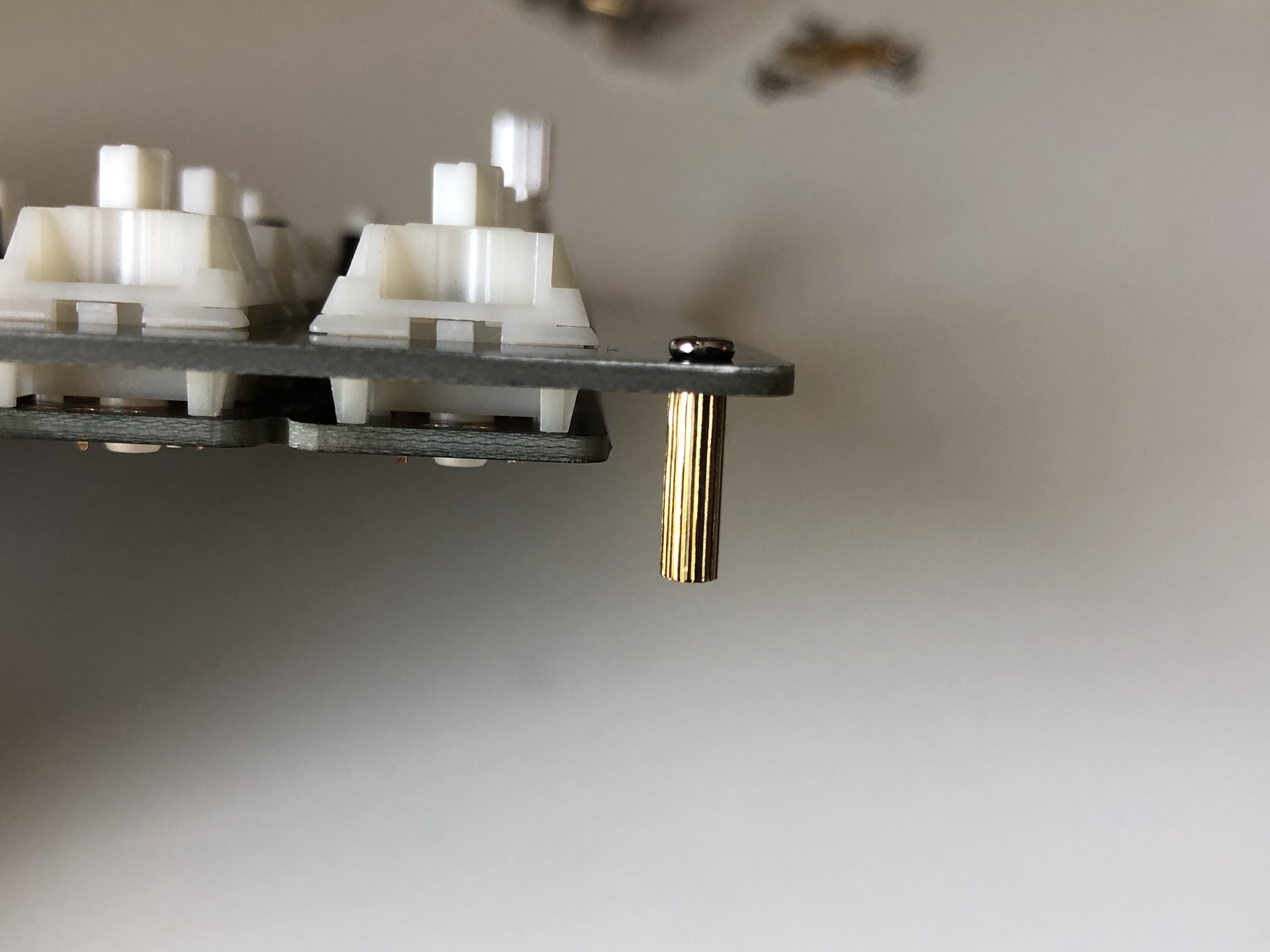 Repeat the process for the rest of the plate: 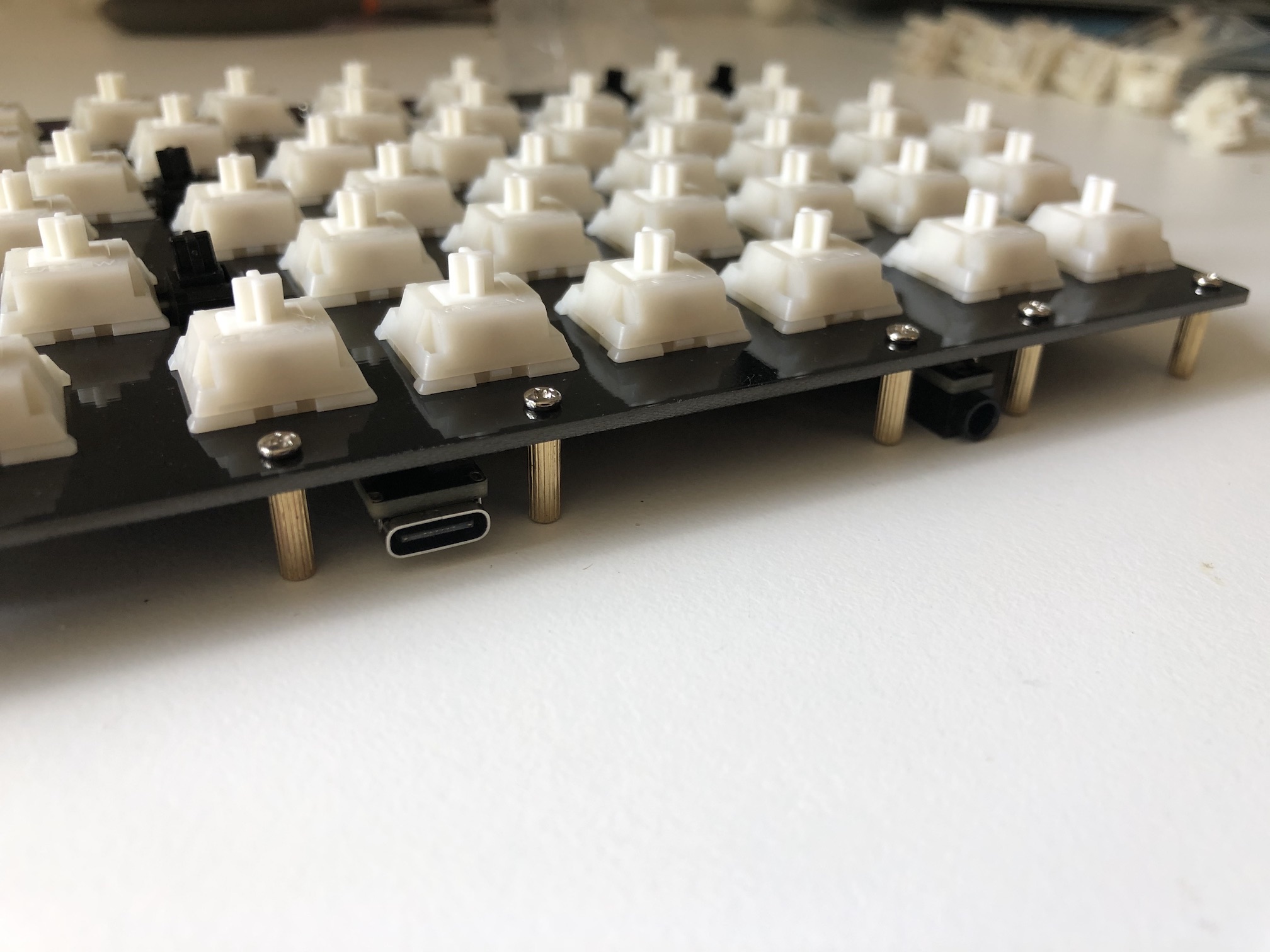 (Optional) If you have a middle layer, insert it now around the standoffs. 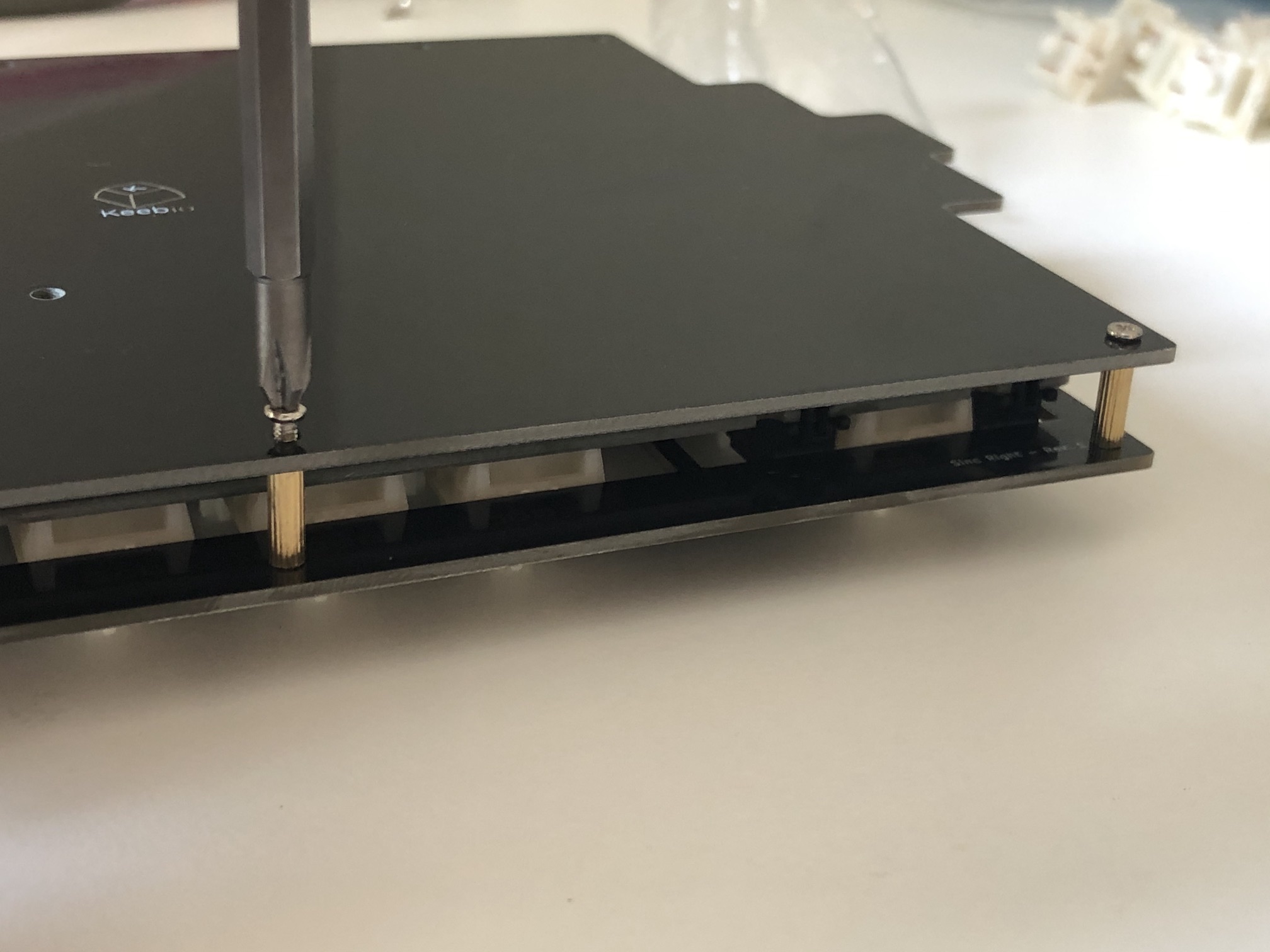 You can reprogram your PCBs using one of the following three methods, listed in order of difficulty (easiest to most difficult). Note that if you want to reprogram the encoders, you will have to setup the full QMK build environment (3rd option listed here), as VIA and QMK Configurator can't handle configuration of the encoders at the moment.

The PCBs are pre-flashed with QMK firmware with VIA support. VIA will allow you to reprogram the keys on your board without needing to reflash it. You can download the VIA here: VIA

The PCBs can also be programmed using QMK Configurator, where you can create your keymapping and then generate a .hex file. You can then take this .hex file and flash it using QMK Toolbox.

The last option is to compile your own .hex file using QMK. This method is more difficult than the first two, but does allow you to use more advanced features (like tap-dance, RGB underglow control, etc.) and reprogram the encoders. To get started with setting it up, go here: The Complete Newbs Guide To QMK.

If you have trouble setting it up, head over to the QMK Discord for assistance.